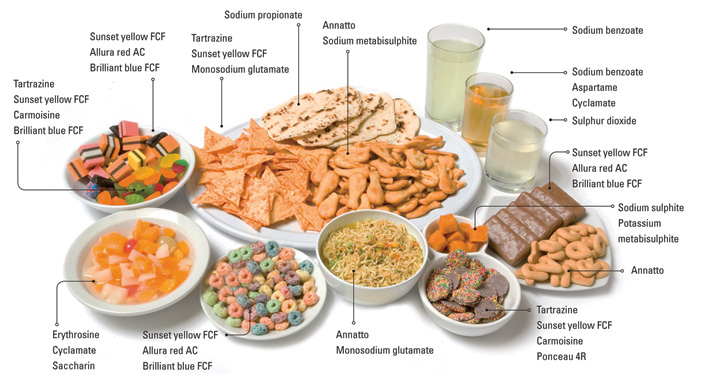 10 Food Additives that are Harmless

Food is one of the primary perishable items. Increasing its shelf life is important for its consumption at a later point in time. The primary elements of increasing food longevity are termed as food preservatives or additives. In the modern world, criminalizing food additives is the common norm. They can cause many deadly diseases like cancer, cardiac problems, allergies, etc. However, upon research, many food additives are also safe to consume. Some common food additives which are harmless are here.

It is the primary substitute for sugar. It causes issues like ADHD, Diabetes, Depression, Cancer, etc. Upon conducting experiments, these myths are now ruled out.

Another substitute for sugar, people took saccharin to be harmful due to its carcinogenic properties. A study revealed that it was causing bladder cancer with lab rats. However, further research revealed that rat tumors were irrelevant to humans.

It is used to prevent the bread from going stale. Presence of these ingredients induces fear of health disorders. This preservative is harmless, and FDA approved.

It is a food dye a.k.a. Yellow No. 5. People associate this with insomnia, behavioral issues, hyperactivities, allergies, and cancer. Extensive research showed that none of the claims are true.

Usually known as Red No. 3, it is used to bring the red luster in jams and cherries. It is often blamed for pituitary gland dysfunction and sperm count loss. Extensive research has proven otherwise.

This additive has many uses, such as being flavor protector antioxidant and emulsifier. It can cause allergies, as per many people. It can be an issue for those people who have Soya allergies only. In addition, the process of its extraction includes toxic chemicals. Choosing an organic alternative can put an end to the problem.

It is a preservative for curing meat, like bacon, ham, etc. This additive is long known to cause cancer. However, the carcinogenic properties will show true color only when it is consumed in huge amount. Even some research claims health benefits of Sodium Nitrite for leg vascular diseases and sickle cell problems.

A primary constituent of meat curing preservatives, Sodium Nitrate is carcinogenic. It can also cause cardiovascular issues. Researchers concluded that consuming little amounts of Sodium Nitrate is not harmful. It also lowers blood pressure in certain cases.

This preservative keeps food fresh. There have been claims that BHT is the potential cause of diseases like asthma, cancer, and behavioral issues in kids. Extensive researches show that it has no connection with human cancer.

Known as Ajinomoto, Monosodium Glutamate or MSG is responsible for the signature taste of Pan-Asian dishes. Consumers have complained of symptoms like numbness, headaches, chest pain and nausea after consuming it. Researches have proven that there is no link between MSG and these symptoms. However, one should consume this substance in regulated amounts.

People have this conception that food additives are harmful. But there are many such additives that are actually safe.

Next article - Ten Medieval Recipes that are Still Consumed »