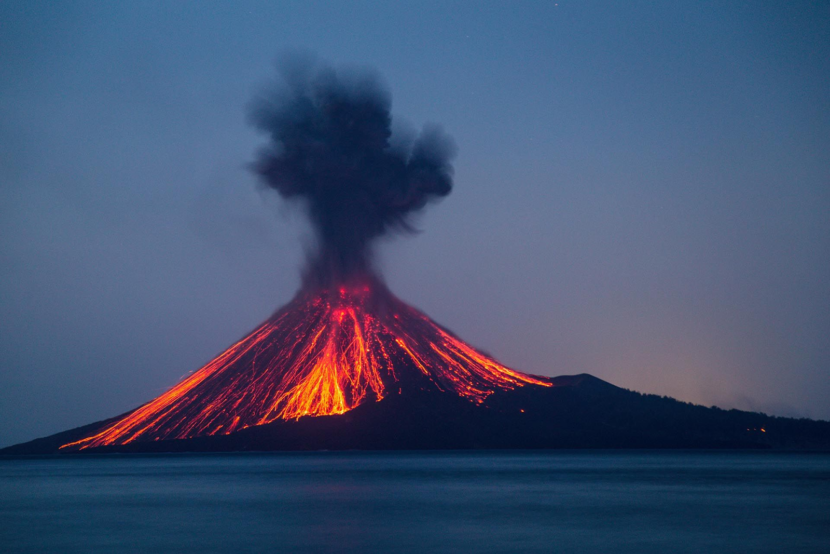 10 Most Famous Volcanoes In The World

The word volcano is derived from Vulcan, the name of the Roman god of fire. It is an opening in the surface of the Earth, and when they are active, they can release hot magma and ash fumes.

However, these intense and magnificent eruptions typically occur at regular intervals of time. Moreover, the famous volcanic eruptions from contemporary times include those from Mount Krakatoa (1883), Novarupta (1912), Mount St. Helens (1980), and Mt. Pinatubo (1991). Therefore, we have listed the top 10 volcanoes in the world.

Around 3500 years ago, the Minoan civilization was wiped out by a volcanic eruption on Thera. Thera which is an island off the coast of Greece that is now also known as Santorini. This eruption is said to have been the greatest volcanic eruption in recorded history. The eruption exceeded Krakatoa in 1883 by four times. Devastating rainstorms are attributed to climatic shifts brought on by the Theran volcanic eruption. The “Myth of Atlantis’ ‘ is also based on this volcanic explosion.

In southern Italy’s Gulf of Naples, Mount Vesuvius is an active volcano that has erupted multiple times. The Roman towns of Pompeii, Stabiae, Oplontis, and Herculaneum were devastated and buried as a result of the eruption that followed in 79 AD. At the time, thermal energy produced by the eruption was 100,000 times greater than that generated by the Hiroshima and Nagasaki atomic bombings. It is a well-known volcano throughout the world.

Since then, Mount Vesuvius has erupted numerous times, with the most recent eruption taking place less than a century ago. Given that approximately 3 million residents live close by the volcanic mountain and that 600,000 people live in the “risk zone,” it is recognised as one of the most dangerous volcanoes in the world. The surrounding volcanic territory of Mount Vesuvius is home to the world’s most densely populated region and is prone to violent outbursts.

One of the five volcanoes that make up the island of Hawaii is called Mauna Loa. Prior to learning more about the Tamu Massif submarine shield volcano, it was long believed to be the world’s largest volcano. Due to their low silica content and fluid nature, the eruptions from Mauna Loa typically don’t explode.

Since it first surfaced some 400,000 years ago, Mauna Loa has continuously erupted for the past 700,000 years. The 1984 eruption was the most recent one. This volcanic peak is a part of the “Decades Volcanoes” project, which attempts to investigate dangerous volcanoes because of the risks it poses to the local population.

In the straits between the Indonesian islands of Java and Sumatra, Krakatoa is a caldera—a hole created as the magma chamber empties during a volcanic eruption. One of the most deadly volcanic eruptions ever documented in human history was the one that took place in 1883. 70% of the island of Krakatoa and the surrounding archipelago were destroyed by the eruption.

Even in remote locations like Australia and Mauritius, people could hear the explosion. The energy of the explosion was 13,000 times greater than that of the Hiroshima atomic bomb. Anak Krakatau, often known as the “Child of Krakatoa,” is a new island that has emerged as a result of eruptions. The catastrophic tsunami that struck in 2018 was caused by the Anak Krakatau volcano’s explosion and collapse.

One of the most stunning and well-known volcanoes, Mount Fuji is located 100 kilometers southwest of Tokyo. Additionally called “Fuji-san,” With a height of 3,776 meters, it is also Japan’s tallest summit. It is one of Japan’s “Three Holy Mountains,” along with Mount Tate and Mount Haku, according to the Japanese people.

This is well-known as a historical landmark with scenic beauty in Japan. The volcano is shaped like a cone, which is extremely unique for a volcano. In 663, a Japanese monk became the first person to ascend Mount Fuji, and Lady Fanny Parkes became the first woman to do it in 1867.

One of Italy’s three active volcanoes, Mount Stromboli is named after the small island where it is found in the Tyrrhenian Sea. It also goes by the name “Lighthouse of the Mediterranean” because it is in an active state with occasional modest eruptions that may be seen around the island. The largest eruption occurred on April 13, 2009. At its peak, there are three active craters, and it is 926 meters above sea level.

The Hawaiian Islands’ Mount Kilauea is an active shield volcano that last erupted between 1983 and 2018. It is located on the southern portion of the island, which dates back between 210,000 and 280,000 years and is thought to have risen above sea level about 100,000 years ago. The Kalapana and Kaim towns, suffered significant property damage from the volcano’s continuous eruptions between 1983 and 2018.

Mount St. Helens, one of the most well-known volcanoes in the world. It is an active volcano situated in the U.S. state of Washington. The Pacific Ring of Fire, which has more than 160 active volcanoes, includes it. The most notorious eruption was the deadliest in US history and took place in 1980. It caused physical destruction, fatalities, and economic concerns. The explosion resulted in the deaths of about 57 persons.

A lateral eruption resulted from a landslide that was caused by an earthquake with a magnitude of 5.1. A National Volcanic Monument was created by the then-US President Ronald Reagan for scientific research and recreational use. Since 1986, it has been possible for visitors to ascend to the mountain’s summit.

In Martinique, a French Caribbean Island, there is an active volcano named Mount Pelée, which translates to “Pelled Mountain” in English. Its height is approximately 1,371 meters. The volcano has been dormant since its final eruption in 1932. Due to the explosion, the town of Saint Pierre was devastated, and between 29,000 and 30,000 people perished.

The term “plan” is now used to characterize eruptions containing ash, gas, and fire clouds because the damage brought on by the eruption was so devastating. It is thought that the incident was the worst volcanic calamity to occur in the 20th century.

In the Philippine Island of Zambales, Mount Pinatubo is a mountain that is now active. It is severely eroded, and dense woods block our view of it. The second-largest eruption of the 20th century occurred in 1991. It was followed by a typhoon that sent a devastating storm of ash and rain to the adjacent towns, forcing thousands of people to flee.

Due to Krakatoa eruption in 1882, it leads to enormous amounts of sulfur dioxide, minerals, and poisonous metals into the atmosphere. The sulphuric acid haze, a 0.5 degree drop in temperature, and an increase in ozone layer depletion were all seen in the months that followed.

There are the top 10 famous volcanoes in the world. Kindly share this post and leave your lovely comments on it.

Next article - 10 Fastest Wild Cats In The World »