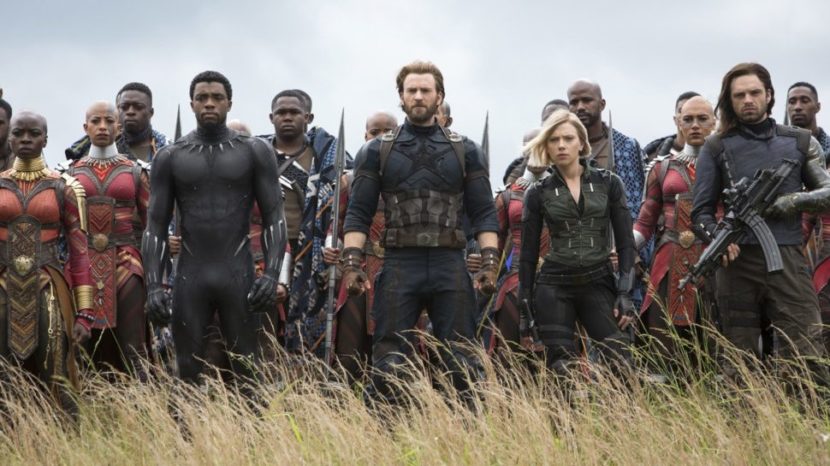 It has only been 10 days since Avengers: Infinity War released and blew away the hearts and melted the brains of each and every Marvel fan in the world. Filled to the brim with action, comedy, laughter, heart-break, Infinity War is all set to be the first Marvel movie to reach the USD 1 Billion club in less than 2 weeks. We here at Top10Tale simply cannot express how we felt when we saw Peter Parker wither away like dust, or when we heard say Steve Rogers say OH GOD when he sat down on the battlefield in a hopeless manner. But what we can do is share with you the scenes or moments that we simply loved. So today, we are going to take a look at the top 10 scenes or moments from Avengers: Infinity War that blew every Marvel fan away. Read on to find out more.

The infamous finger snap that made us want to rip his entire arm off – once Thanos ripped the Mind Stone out of Vision’s forehead and placed it on the Infinity Gauntlet, Thor attacked him by stabbing his chest with the new Stormbreaker axe. But it was too late, and definitely misaimed, as Thanos snapped his finger and half of the universe simply ceased to exist. Once the finger was snapped, we say Bucky Barnes fall to the ground and wither away, we say Black Panther wither away while helping out Okoye, the general of the Dora Milage, and the perhaps the most painful death of them all – we say Peter Parker wither away in Tony Stark’s arms as he says that he does not want to go. If only Thor had aimed for Thanos’ head – if only.

Thor travels to Nidavellir to create the Stormbreaker axe with Groot and Rocket. And when he is done, the theatres simply exploded when he landed in Wakanda with his usual thunder and lightning and decimated half of Thanos’ army. Thor’s arrival truly evens the odds, as the team almost beats Thanos and his band of not-so-merry alien creatures, the Black Order. But the best part of this scene is Mark Ruffalo’s Bruce Banner shouting that the Black Order is in trouble when Thor lands in Wakanda. We loved Thor’s arrival, but we lost our head laughing at Banner’s proud remark.

We all knew that Captain Marvel a.k.a Carol Danvers would be hinted in some way or another in Infinity War, as she is going to have her standalone film next year, and is definitely going to be one of the central characters in Avengers 4. But during the one and only post-credits scene the movie had, when Maria Hill disintegrated into thin air, Nick Fury hurriedly ran to the back of their car to grab a communication device from the back seat. He presses a few buttons on the gadget and sends a message only to disintegrate within seconds. We see the device falling to the ground and a message being sent, following which, we see Captain Marvel’s insignia appear on the screen of the device. This was yet another scene that blew our minds and made us start guessing the storyline of the next Avengers movie.

The return of the Red Skull

We did not expect any of the old Marvel villains to make an appearance in Infinity War, but at the end of Captain America: The First Avenger, we hoped that we would see Red Skull again as we were sure that he was transported to another dimension when he touched the Tesseract, which turned out to be the Space Stone. When Thanos travels to Vormir with Gamora, we see Red Skull guarding the Soul Stone. He tells Thanos that he has to sacrifice what he loves most in order to gain the Soul Stone.

Gamora falls to her death

Once Red Skull tells Thanos on Vormir that he has to sacrifice what he loves most in order to gain the soul stone, tears started flowing down his cheeks. Gamora, in her over-confidence, gloats that Thanos has lost because he does not love anything and that is why he will never gain the Soul Stone. To our astonishment, Thanos, with a heavy heart and tears down his rugged cheeks, grabs Gamora by her wrist and throws her down the cliff. Gamora falls to her death and Thanos ends up in knee deep water with the Soul Stone in his hand. This truly shows how mad Thanos really is and what he is willing to do to accomplish his mission of cleansing the universe.

Thor meets the Guardians of the Galaxy

In the very first scene, we hear an Asgardian distress call being sent out when Thanos attacks the Asgardian ship headed for Earth. Later in the movie, the Guardians of the Galaxy pick up the signal and travel to its location, only to find debris of a blown up ship and dead bodies floating all around. While rummaging through the debris field, Thor crashes on the Guardian’s windshield and opens his eyes, forcing the Guardians to bring him into their ship as he was still alive. We simply loved this segment because of Peter Quill’s insecurity with Thor’s physique, as he starts mimicking Thor’s deep voice and Australian accent.

We simply laughed our heads off when Bucky Barnes and Rocket came across each other for the very first time on the battlefield in Wakanda. This is the very reason why we love superhero team-up and crossover movies, because all our favourite heroes and characters come together on one screen and blow our minds away. As Rocket shoots down soldiers of the Black Order, Bucky picks him up and shoots down the soldiers in a circular motion. Once put down, Rocket asks how much should he pay for Bucky’s rifle, to which Bucky replies that it is not for sale. The scene ends with Rocket exclaiming that he is going to get Bucky’s arm – which made us laugh our heads off.

Scenes in Wakanda with Wakandan soldiers

Although this is not one particular scene, we simply loved every moment and scene the movie spent in Wakanda, especially the battle sequence. We witnessed the Dora Milage fighting off the soldiers of the Black Order with the help of M’Baku and the Jabari tribe as well as the soldiers from the Border tribe. We simply loved Black Panther taking down hordes of Black Order soldiers with the help of Steve Rogers, Bucky Barnes, Natasha Romanoff, War Machine, Falcon and Bruce Banner in the Hulk-buster armour. Although Wakanda could have been portrayed for a bit longer in the movie, we loved every second of what was on offer.

Peter Parker definitely seems to be a fan of old, pop culture movies, as we had already seen in Captain America: Civil War with the reference to Empire Strikes Back. This time around, he uses a scene from the 1979 movie ALIEN, where he suggests the same to Tony Stark, and Stark blows a hole in Ebony Maw’s ship and sucks him out to space – something that was the turning point of the ALIEN movie.

The very first scene of the movie – we see the Asgardian ship in complete ruin, with half of the Asgardian already dead, and the other half missing from the scene. When Hulk fails to stop Thanos and lies unconscious from the fight, Heimdall uses the last bit of his magic to use the Bifrost sword and send the Hulk to Earth to warn the Avengers. Thanos tells him it was a mistake and stabs him through the heart. Later in the scene, after handing over the Tesseract, when Loki offers is undying allegiance to Thanos and then tries to stab him, Thanos picks him up by his throat and squeezes the life out of him. This was the first death in the movie which shattered our hearts.