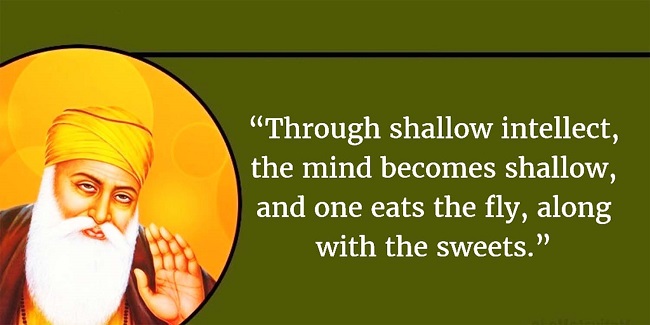 29 November, 2018
lifestyle
2970
Guru Nanak Ji has been the beacon light for many. Most of us count for our lessons and for seeking answers to the wordings of the Guru. Here we are with few quotes that have been given by Guru Nanak for soothing the tired souls and for those who demand answers. Here are the top 10 motivational quotes by Guru Nanak.

There is but One God. His name is Truth; He is the Creator. God fears none; he is without hate. He never dies, he is beyond the cycle of births and death. God is self-illuminated. He is realized by the kindness of the True Guru. God was True in the beginning; He was True when the ages commenced and has ever been True. He is also True now. There is but one God. True is His Name, creative His personality and immortal His form. He is without fear sans enmity, unborn and self-illumined. By the Guru’s grace He is obtained.

If the people use the wealth bestowed on them by God for themselves alone or for treasuring it, it is like a corpse. But if they decide to share it with others, it becomes sacred food.

Only fools argue whether to eat meat or not. They don’t understand truth, nor do they meditate on it. Who can define what is meat and what is plant? Who knows where the sin lies, being a vegetarian or a non-vegetarian?

There are worlds and more worlds below them, and there are a hundred thousand skies over them. No one has been able to find the limits and boundaries of God. If there be any account of God, then alone the mortal can write the same; but God’s account does not finish, and the mortal himself dies while still writing.

Me, the bard out of work, the Lord has applied to His service. In the very beginning, He gave me the order to sing His praises night and day. The Master summoned the minstrel to His True Court. He clothed me with the robe of His true honour and eulogy. Since then, the True Name had become my ambrosial food.

Offspring, the due performance on religious rites, faithful service, highest conjugal happiness and heavenly bliss for the ancestors and oneself, depend on one’s wife alone. Whatever be the qualities of the man with whom a woman is united according to the law, such qualities even she assumes, like a river, united with the ocean. The production of children, the nurture of those born, and the daily life of men, of these matters woman is visibly the cause.

Whatever kind of seed is sown in a field, prepared in due season, a plant of that same kind, marked with the peculiar qualities of the seed, springs up in it. Speak only that which will bring you honor. He who has no faith in himself can never have faith in God. Burn worldly love, rub the ashes and make ink of it, make

All in all, these are the top 10 motivational quotes by Guru Nanak. In many of the quotes you will find answers for most of the questions that arise in your aching and troubled heart. in case we have forgotten to cover one of your favourite quotes by Guru Nanak then you may leave us the same in the comment section below.

Next article - Top 10 Must Know Things About Ranveer Singh »