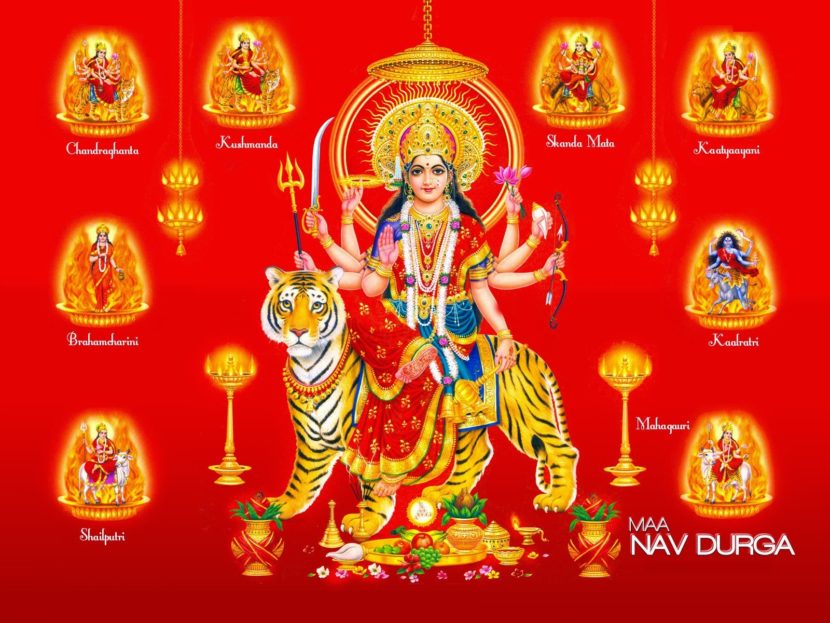 “Navaratri”, a popular Hindu festival is a nine night’s Hindu festival to celebrate most auspicious days of the lunar calendar as per Hindu belief. “Navaratri” in its literal meaning nine nights devoted to Goddess Durga, which symbolizes purity and power. Navaratri festival is celebrated twice in a year, once in March/April known as “Chaitra Navaratri” and other one in September /October as “Sharad Navaratri”.

There are various Navaratri Pictures, Navaratri images for facebook and whatsapp that people send to their loved ones. Following are the picture that truly depicts the essence of the Navaratri Festivities. 1) Day 1 of Navaratri is dedicated of Shailaputri Maa. She is considered as the daughter of mountains . Also known as Sati Bhavani ,Parvati or Hemavati ,daughter of Hemavana-the king of Himalayas ,she is first among the Navdurgas. 2) Day 2 of Navaratri is dedicated to Goddess Bharmacharni. She is the one of the forms of Goddess Durga who has great divine power and grace. She blesses Her devotees with peace, prosperity and Happiness. 3) Day 3 of Navaratri is devoted to Goddess Chandraganta, who blesses Her Devotees with beauty and bravery. She has a “Chandra” or Half moon on her forehead in the form of bell or “Ghanta”. Thus true to her name “ChandraGhanta”. 4) Day 4 of Navaratri is devoted to Goddess Kushmanda who is the creator of the entire Universe. She is often depicted as having eight or ten hands . She holds rose , weapon etc in her hands. 6) Katyani Mata: On the sixth day of Navaratri Goddess Katyani is worshipped. It often known as Warior Goddess among all nine Goddess. It is known to end all torments of devils & demons.