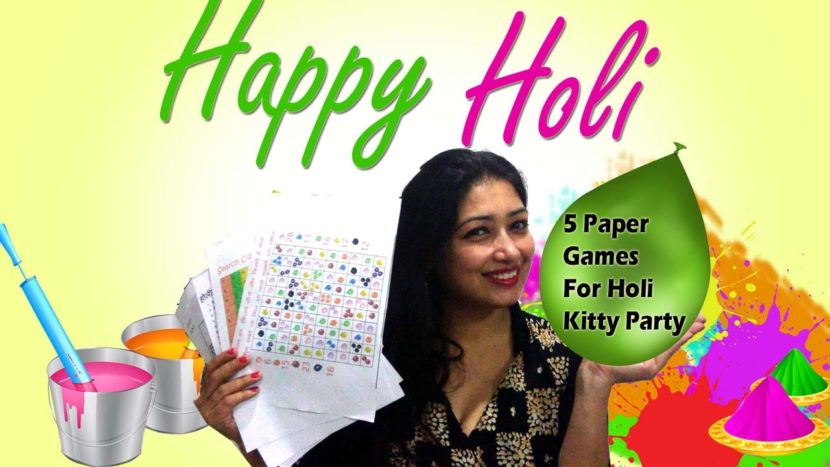 The reason why you are reading the article is probably that you are planning to organize a holi party at your home. To entertain your guests it is important to have different games at the party. There are a plethora of games that you can include in the party but you need to restrict yourself as far as the budget is concerned. We are here to help you with some ideas that are pocket friendly. In this article we are going to discuss top 10 holi game ideas for holi party that you are surely going to like. These are not only fun and easy to play but at the same time also convenient to organize. Have a look at the holi game ideas below:

In this game you need to place a lot of water balloons on the floor. There ought to be two buckets kept and the teams need to be divided into two parts. All the members of both the team are required to be given a needle. Each member is then supposed to pick up the water balloon with the help of a needle and without bursting it has to put it into the bucket. Team that collects maximum balloons this way wins the game.

In this game you are supposed arrange for a bucket that is filled with coloured water. In this bucket you need to put some coins and stones. The player has the task of finding out the coins. One who is able to find maximum coins in 1 minute wins the game.

In this game you are supposed to place the lit candles on the table and provide each participant a water gun. The player then has to blow off the candle with the help of the water gun. One who is able to blow off the maximum candle this way wins the game.

In this game, the teams are made and each team is well supplied with empty balloons, water bucket and water gun. Players are supposed to fill the balloons with water gun and empty water from the balloon into the glass. a team that is able to collect maximum water this way wins.

Players needs to hop over a rope and reach the fixed point with  water filled mug in hand. The player who ends up saving maximum water in the mug at the end of the race wins the game.

Here you need to spread the balloons all over the floor. Teams can be divided into two parts. Each team needs to collect balloons in a time span of 1 minute. The team which ends up collecting maximum balloons wins the game.

In this game you are supposed to keep glasses of diverse beverages in front of the people. A person needs to pick up any glass he likes, have it and then guess the name of the drink. One who gets maximum guesses right wins the game. To add diverse holi beverages to the game you make have a look at our guide.

In this game you are supposed to supply water balloons to your guests after dividing them into two teams. The team members are then supposed to burst these water filled balloons with the help of a toothpick. Team who is bale to burst maximum balloons in one minute wins.

You are supposed to divide the team into two parts and give each team water balloons. One member at a time is supposed to throw it on other person from the different team. The team whose more members get wet loses.

Another game that can be played with balloons is passing the leaking balloon to one another. Anyone who is last to hold it can be asked to do a dare or entertain the guests in any way.

All in all, these are the top 10 holi game ideas for holi party that you can make a part of your holi party. Not only are these games fun but at the same time also helpful in keeping your guests engaged. Apart from this, these are the games that will add charm to your holi party but will not put extra burden on your pockets all the equipment used in these games are already a part of your holi party, the only difference is that you will require more quantity of the same. to share more holi game ideas with us drop us the comment in the section below.

Next article - Top 10 Must Have Dishes at Holi Party »