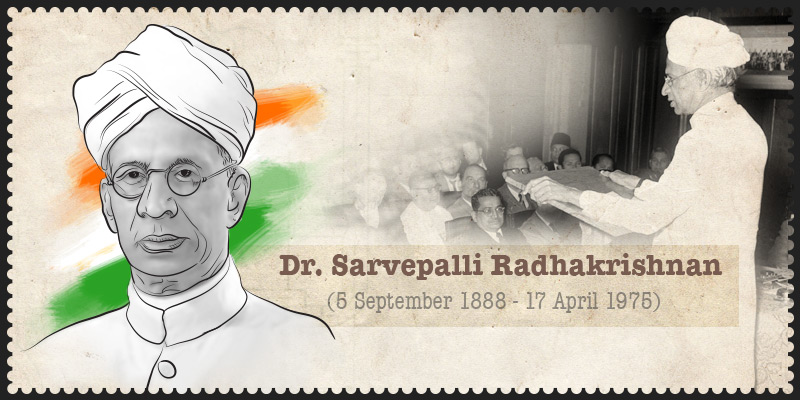 It was back in 1962 that the birthday of the former president Professor Sarvepalli Radhakrishnan was for the first  time observed as Teachers’ Day on September 5. Dr Radhakrishnan had played a lot of roles in his life. he was the President of India and also remained the vice-president. In addition to this, he was the Indian envoy to the Soviet Union. However, all of us know him better as a philosopher as well as a teacher. As Teachers’ Day is on its way once again this year, here are the Top 10 must know things about Sarvepalli Radhakrishnan that will help you know him better. These are as follows:

1) Born and brought up

It was on September 5, 1888 that Sarvepalli Radhakrishnan was born. He was born in a poor Brahmin family at Tamil Nadu’s Tiruttani. It is a town in the then Madras Presidency. his father had an inclination towards making him a priest and not at all towards making him study English. It was then that Radhakrishnan was sent to a school in Thirupati. He turned out to be a brilliant student and received scholarships regularly while his academic life. He later took to studying in Voorhee’s College in Vellore, and then went in for Madras Christian College when he was 17 years of age. It was here that he began to study philosophy though it was not by choice. You will be amazed to know that he had not enough money to purchase books and had a cousin who had studied philosophy from the same college and who passed on his books to him that eventually became the reason for  Dr Radhakrishnan to study the same. Radhakrishnan was just 20 when his thesis on Vedanta philosophy was published and later hailed as one of the best.

Radhakrishnan without doubt was popular among his students. It is he who is given the credit of bringing Indian philosophy to the Western dominion. When he was leaving the University of Calcutta so as to teach in Mysore, it goes that his students made preparation for driving him in a flower-decked carriage from the railway station. This clearly shows the respect and love that his students had for him.

He was later married to one of his distant cousin Sivakamu when he was 16 years of age. She died in 1956. Former Indian cricketer VVS Laxman is his great grandnephew.

Prior to holding vice presidency in 1952, in 1946 he was appointed as the ambassador to the UNESCO and later to the Soviet Union. It was in 1962 that he was elected the President of Republic of India. Dr Sarvepalli Radhakrishnan (1888 – 1975) who was the second president of India, administered the oath of office to the prime minister Indira Gandhi at the Rashtrapati Bhavan in New Delhi.

It was when he became the President that some of his students pleaded him to let them celebrate his birthday.as a reply to quote his words, he said, “Instead of celebrating my birthday, it would be my proud privilege if September 5 is observed as Teachers’ Day.” It is since then that his birthday is observed as a day to acknowledge the contribution of teachers in the lives of individuals of all ages.

7) Leader of the Indian Republic

It is believed that the former prime minister Jawaharlal Nehru was wanting Radhakrishnan to succeed Rajendra Prasad at the post of president in 1957. However,  Maulana Azad stood in strenuous opposition against  this and did not allow this to happen. Nehru then assured that Radhakrishnan becomes the leader of the Indian Republic in 1962.

Presidency of Radhkrishnan was quite tumultuous. It was during this time that India witnessed two wars. One was against China and another was against Pakistan in 1965. As a reaction to these wars on September 25, 1965, he said: “Pakistan assumed that India was too weak or too afraid or too proud to fight. India, though naturally disinclined to take to arms felt the necessity to defend herself when attacked. Pakistan also assumed that communal disturbances would occur in the country and in the resulting chaos, she could have her way. Her miscalculations must have come to her as a rude shock.” In 1964, Nehru passed away. Later Lal Bahadur Shastri’s also passed away within two years after Nehru in Uzbekistan which was quite a shock for him.

If you read the biography of Radhkrishnan, you will find the words of his son. To quote his son, it is written, “throughout a long life had never been guilty of a mean deed; and it is unlikely that he ever had a mean thought.”

The then prime minister Indira Gandhi did not acknowledge Radhakrishnan’s public criticism of her government. It was keeping in mind this fact that she did not permit him the second term in 1967.  This acted as a great blow to Radhakrishnan. It is then assumed that last few years of his life were not as many of us might be expecting. He was quite lonely and depressed. His body and mind finally gave up and he left for his heavenly abode on 17th April 1975.

All in all, these are the Top 10 Must Know Things About Sarvepalli Radhakrishnan. There is a lot that he went through in his life. the day that is celebrated today to remember him is completely derived by him.

Next article - Top 10 Most Popular Sayings by Sarvepalli Radhakrishnan   »