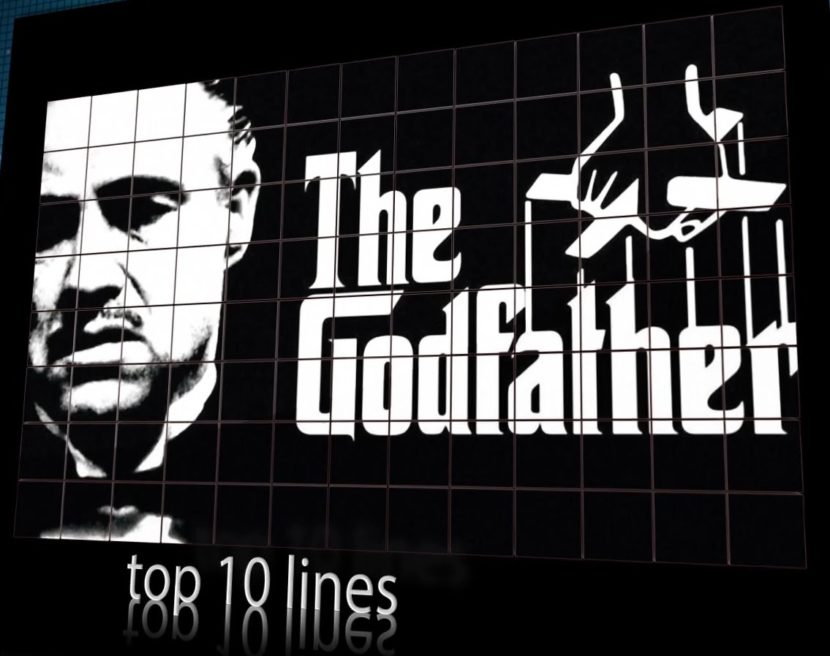 Top 10 Quotes from The Godfather

The Godfather has always been a legendary part of the pop culture we live and believe in. It is an award winning crime drama film based on the Corleone family and its members, namely Vito Corleone (Marlon Brando), and his son, Michael Corleone (Al Pacino), and how the Italian-American crime syndicate use to function in America in the 40s and 50s. The movie played host to some wonderful dialogues and quotes. So today, we are going to take a look at the top 10 quotes from The Godfather. Read on to find out more.

May their first child be a masculine child

This blessing was bestowed on Vito’s daughter Connie on her wedding day by Luca Brasi, one of the caporegime under the Corleone family. Several other films, including Sabrina (1995) have referenced this quote.

For justice, we must go to Don Corleone

This famed quote by Bonasera was said to Vito Corleone, who mentions that he said this to his wife when his daughter got attacked and the attackers were released without any punishment.

Ah, that little farce you played with my sister. You think that would fool a Corleone?

When Michael Corleone finds out about that Carlo Rizzi (Connie’s husband) betrayed the Corleone family to help the Tattalgia family and Don Barzini to murder Santino, he says this to Carlo, while also mentioning that he is out of the family business for good.

Fredo, you’re my older brother and I love you. But don’t take sides with anyone against the Family again.Ever

When Fredo Corleone takes Moe Greene’s side in an argument, Michael makes sure Fredo understands what’s what by saying this. Fredo fails to understand that Moe Greene might not be good for the Corleone family business, but Michael knows how to put him in his place.

All right. This one time I’ll let you ask me about my affairs

When Kay Adams (Michael’s wife) asks him if he really had the heads of the five families and Carlo killed, Michael says this to her and allows her to ask the question, to which he answers No, forced to hide the truth from his wife.

Do I have your loyalty?

Vito Corleone asks Peter Clemenza this question when Clemenza asks the Don for permission to set up his own family with Tessio. Clemenza answers in the positive and says he will always trust the Godfather.

Referenced in quite a few films in the later years, Michael Corleone says this to Santino when Santino, Tom Hagen and Clemenza makes fun of Michael when he says he is going to kill Sollozzo and the police captain.

In Sicily, women are more dangerous than shotguns

Michael’s bodyguard in Sicily, Calo, says this quote when Michael sees Apollonia for the first time and asks Calo to ask around for her.

Mikey, why don’t you tell that nice girl you love her?

Clemenza was joking around with Michael in the kitchen of the Corleone family home when Kay called Michael to find out how Vito was doing at the hospital, and when she asked him to tell her she loved her.

Do you know how naïve you sound, Michael? Presidents and senators don’t have men killed

When Michael compares his father Vito Corleone to any other powerful man, such as a politician or senator, Kay shows off her sarcastic side by saying this, during Connie’s wedding reception.