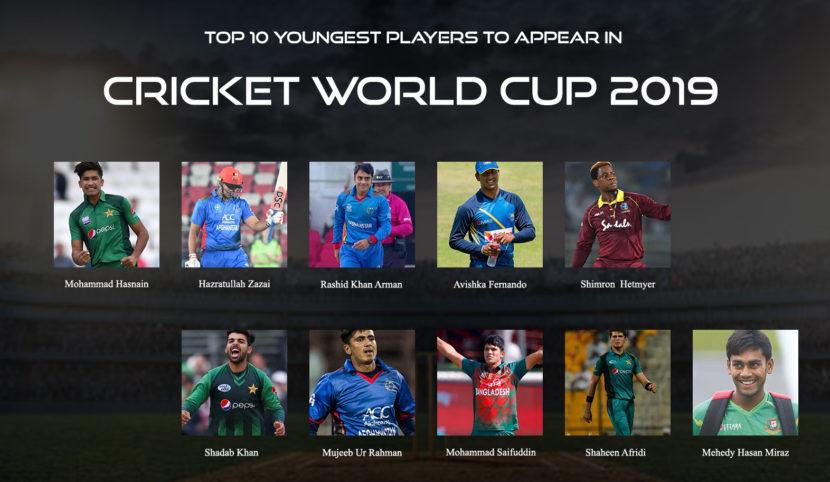 The country rises when the youth is indulged in putting sincere efforts and hardships together as a team that is passionate to play for the pride of the nation. It is a keen responsibility of cricket squads to welcome newcomers to the field and guide them not to play for oneself but for the team and the motherland. ICC World cup is such a prestigious event where the upcoming cricketers are given a golden opportunity to prove their skills and live their dreams. In the 12th edition of the World cup, there are six youngest players, all under 22 years and from Asia. Holding the colossal trophy high up in hands is the result of endeavors put forth in unison by young and experienced players for the action-packed tournament. Let us meet The Top 10 Youngest Players to Appear in the World Cup.

Born on 1st November 1996, Saifuddin is around 22 years who made his T20 debut on 13 November 2016 playing for Comilla Victorians in the 2016–17 Bangladesh Premier League. He is a bowling all-rounder who scored his maiden century in first-class cricket, not out for East Zone in the final round of the 2017–18 Bangladesh Cricket League.

22 years old Shimron landed on earth on 26 December 1996. Very early in age, he was named as the captain of the West Indies squad for the 2016 Under-19 Cricket World Cup. Looking at his powerpack performance, he was referred to as one of the five breakout stars in men’s cricket in 2018 by the International Cricket Council (ICC)

Another young sportsman was born on 25 October 1997. It is surprising to watch a 21-year player exhibiting all-rounder cricket skills. He is a right-handed batsman and a right-arm off break bowler, who is prepared to play Tests and One Day Internationals (ODIs). In very few matches, it was clearly acknowledged by Bangladesh to have found an exceptional talent on the ground.

Zazai, an Afghan batsman was born on 23 March 1998 in Paktia. He entered the international cricket sphere to make his debut for the Afghanistan cricket team in December 2016. So young to fetch the highest individual score in a Twenty20 International, with an unbeaten 162 runs off 62 balls against Ireland in 2019 was worth admiration.

Weerahandige Idol Avishka Fernando(21 years) took his first breath on 5th April 1998. He was only 18 years when he made his international debut for the Sri Lanka cricket team in 2016. He is a right-handed opening batsman and a right-arm medium fast bowler. Avishka Fernando has made the record for scoring the most number of runs and centuries in Youth ODI history for Sri Lanka (1379 runs).

Living his twenties, Rashid was born on 20 September 1998. He is recognized as the current captain of the Twenty20 International (T20I) national team. In June 2018, he was popularized as the fastest bowler, in terms of time after he took 50 wickets in T20Is. During the 2019 Cricket World Cup in June 2019, Khan played his 100th international cricket match for Afghanistan.

4th October 1998 marked as Shadab’s Date of birth says to have enjoyed just the 20 years of life. He belongs to Mianwali, a city in northwest Punjab, Pakistan. He made his One Day International (ODI) debut for Pakistan against the West Indies on 7 April 2017. He was named after his brilliance as the PCB’s Emerging Player of the Year in September 2017.

Bravo! At such an early age (19 years), when a man struggles for higher education or employment, Mohammad added fame to his name. A man born on 5th April 2000 made his international debut for the Pakistan cricket team in March 2019. Just commendable! His ferocious pace and accuracy, bowling the fastest delivery of the tournament, at 151 Kph are noteworthy.

Pakistan deserves a huge round of applause for giving a dream platform for extremely talented youngsters. A fast bowler(90 mph) was born on 6 April 2000, who made international commencement for Pakistan in April 2018 and his Test match for the team in December 2018. He has always shown excellence in bowling, batting, and fielding.

This is unbelievable that an 18 years old has made it for the ICC World Cup 2019. Mujeeb is the first male in the 21st century (28 March 2001) who played international cricket. To become the youngest player who would have taken a five-wicket haul in a One Day International match is genuinely an incredible accomplishment.

These are some the youngest cricket stars of the ICC World cup 2019. They are flawless and worth watching in the fields. Do not miss the chance to witness their terrific performance.