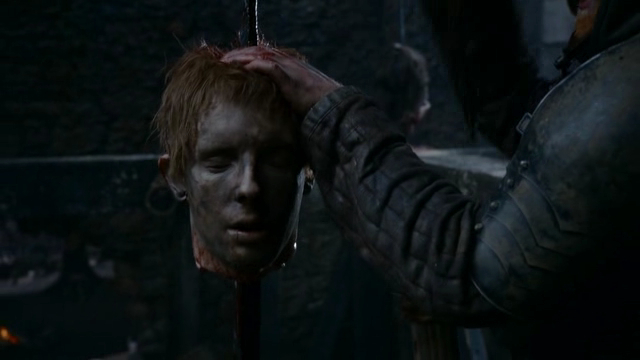 Game of Thrones is perhaps the most watched show on Earth. Since 2011, GOT has continued to win and rule the hearts of television viewers all over the world. But the one point of the show that both attracts and breaks the hearts of millions of viewers – the tragic deaths. So far, there have been 90 or more noteworthy deaths on the show, but today, we are going to talk about the top 10 tragic deaths on Game of Thrones. So read on to find out more.

Shireen was the daughter of Stannis Baratheon, and was quite well-read, smart and perhaps the sweetest character on GOT. But she was burned alive at the stake by Melissandre, who sacrificed her to the Lord of Light in S05E09, apparently with Stannis’ approval.

We have never seen Hodor without Bran Stark, and vice-versa. But the one time we did see Hodor alone was when he sacrificed his own life to protect Meera and Bran from the wights. His tragic end came in S06E05 at the hands of the wights while holding them back behind a door, or rather, while holding the door.

The Red Wedding was perhaps the most tragic group slaughter of the entire series, which saw most of the Starks dead. During S03E09, Lady Catelyn Stark had her throat slit by Black Walder Rivers, which was originally planned by Walder Frey and Queen Cersei.

We all hoped Ned Stark would be around for quite a few seasons. Sadly, the viewers were disappointed when Joffrey had his head cut off at the hands of Sir Illyn Payne in S01E09, and that too right in front of Sansa and Arya. But life goes on, and so did the show.

Another victim of the Red Wedding in S03E09, Robb Stark was stabbed in the heart by Roose Bolton, after one of the Freys shot him with an arrow. The episode also saw the death of Robb’s wife and their unborn child. After killing him, the Freys killed Robb’s direwolf and attached its head to his body – which was disgusting as well as tragic.

Obery Martell introduced us to the exotic land of Dorne, and the viewers were truly hurt and heart-broken when the writer and the creators killed him off. In S04E08, The Mountain Gregor Clegane smashed his skull and his face in the trial by combat opted by Tyrion after Joffrey’s murder.

We all remember the sweet old Maester Luwin, Bran and Rickon’s teacher and the Maester of Winterfell. He was responsible for the kids’ welfare after the Starks left or died, or both. He played a vital role in Bran and Rickon’s escape from Theon’s hands. He was killed by Osha after Ramsey’s men stabbed him in S02E10.

The Lord Commander of the Night’s Watch, who became something of a father figure for Jon Snow and even gave him Long Claw, was stabbed to death by a traitor at Craster’s Keep in S03E04. His son Jorah did not find out about his father’s death for two more years, which is even more tragic.

Another Stark murder left us baffled and heart broken in S06E09, when Ramsey Bolton shot an arrow through his back during the Battle of the Bastards outside Winterfell.

The one death that completely changed Jon Snow – Ygritte was shot with an arrow by Olly during the Castle Black battle scenario in S04E09. Jon was never the same again, especially after he made eye contact with Ygritte just as she was dying.