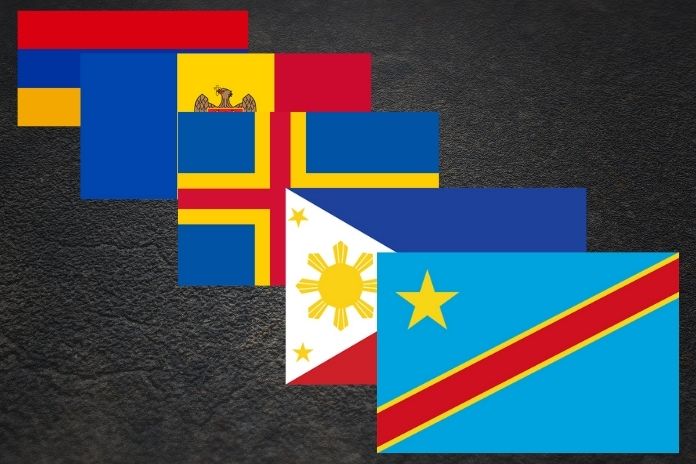 Flags are important symbols for each country, representing people, history, goals, and values. A flag also represents a government and its truth and principles.

The different colors and designs on flags help to distinguish between nations. If you come across a particular national flag in a region outside its country, it means that the government participates in ownership of a project or activity.

The colors and designs used on a flag have a deeper meaning. Different countries have flags that combine red, yellow, and blue colors. Each color has one or more underlying implications.

Common meanings of red, yellow, and blue colors on a national flag

Red is a color that usually occurs in almost every country that was colonized. It stands for the bloodshed during the revolution. It also symbolizes strength, power, energy, and war involved in gaining independence from the colonial rulers.

Yellow or gold stands for the wealth of a nation, such as minerals or the happiness of a country.

Blue is a color that stands for the freedom of a country and positivity, prosperity, perseverance, and patriotism.

Each country’s flag has unique aspects and a design that has a meaning that is important and appreciated by a country. Countries that use red, yellow, and blue flags are Romania, Chad, the Aland Islands, the Democratic Republic of Congo(DRC), Andorra, Colombia, Mongolia, Moldova, Armenia, and the Philippines. Other countries use red, blue, and yellow colors along with different colors. Countries include Barbuda, Swaziland, Cape Verde, Kiribati, Malaysia, Tuvalu, and Venezuela.

The current flag dates back to 1897. The flag is a rectangle consisting of a white equilateral triangle composed of three stars and a sun with a face with eight rays. Sun and stars are yellow, and the remaining part consists of two identical stripes in blue and red.

History of the Philippine flag

Flags were first used in the Philippines in 1860 in the Revolutionary Movement against Spanish rule. The first flag was a red rectangle with triple k symbols on a red background, the red signifying blood, while the triple k represented the members who were the colonized citizens. Later, the movement adopted a flag that used a white sun and syllable ka for the letter k. In 1897, the campaign adopted a flag showing sun and its face with eight rays for the eight provinces of the Philippines. The current flag was raised on May 28, 1898, in Alapan during a Philippine Revolutionary War. In 1899, a rift broke out between the Philippines and the United States, leading to the defeat of the Philippines. The loss led to the banning of the Philippine flag and the use of the U.S. flag until October 30, 1919. Until December 1941, the nation used its flag again when it was banned because of the Japanese invasion. In 1946, after gaining complete independence, they raised their flag without prohibition to this day.

The Romanian flag was introduced in 1834 and consisted of three colors in vertical stripes. Blue is the color on the left, followed by yellow in the middle and red on the right. The flag is similar to Andorra and Chad’s, and the colors are of the same length.

History of the Romanian flag

The first flag consisted of blue, yellow, and red in horizontal design. In 1862, switching of blue and red bands and In 1866, the vertical blue-yellow-red flag was introduced and used until 1948. After 1948, the communist era raised a national badge for the flag. In the communist era, class four flags were used, and they differed only in the badge. The flag of 1866 was then adopted in 1989 and is the one now in use in Romania.

The flag of Chad is similar to the Romanian flag, only that the colors on the vertical stripes are blunter than the Romanian flag. The flag was introduced on November 6, 1959, and combined red and blue from the flag of France, the colonizers, and yellow, a pan-African color.

Blue symbolizes the sky and the hope of the citizens; yellow represents the sun and the desert. Red symbolizes the bloodshed during the struggle for independence.

The flag was introduced when Chad was still a colony of France. However, after independence, the flag did not change. There was a time when a problem arose that the flag was almost identical to those of Romania. None of these countries reversed their flag design.

Aland is a Scandinavian country. Its flag consists of a red cross within a yellow Nordic cross, usually on a blue background. The vertical bars of the crosses are usually tilted more to the left.

History of the Aland flag

Aland took over the flag use in 1920. It was a symbol of the unity of Finland, Sweden, and Russia to preserve Swedish culture. The first flag consisted of horizontal blue and yellow colors. The current flag was adopted in 1952.

The flag design is derived from the Swedish flag, except that it contains a red cross within the yellow cross. The Red Cross stands for Finland, as the Aland Islands were an autonomous province of Finland. Aland celebrates Flag Day on June 9, autonomy, and on the last Sunday in April.

The sky blue stands for peace, red for the bloodshed during the revolution to gain freedom, while yellow stands for the country’s wealth. The star signifies that the nation has a bright future ahead.

History of the DRC flag

The flag of the Democratic Republic of Congo had several designs. The first design was a royal blue background with a yellow star in the middle and was used from 1877 to 1960. After 1960, a second design was adding six more stars to the far left margin, which represented the six provinces of the Democratic Republic of Congo at the time, and it was in use for three years. In 1964, DRC introduced another flag. It was similar to the current flag with a dark blue hue, and it was in use until 1965. In 1966 the red stripe was enlarged, and the star reduced.

In 1971, the Democratic Republic of Congo became Zaire with a new flag. This design ended with Mobutu Sese Seko’s reign in 1997. The 1960 flag was re-adopted, and in 2003, the Sky blue substituted the royal blue to 2006. In 2006, the current flag was adopted. It is similar to the flag used from 1966 to 1971 but has a lighter shade of blue. 30 RC had a total of 7 flag designs. Also, the president’s flag is similar to the national flag, only that it bears the inscription “Le President.”

The flag of Andorra has three vertical stripes blue, yellow, and red, with a coat of arms on the yellow stripe. Blue and red lines are of the same width, but the yellow bar is slightly wider than the two stripes.

The first flag used in Andorra consisted of red and yellow vertical stripes of the same size and was used from 1806 to 1866. The second design was by Napoleon 3, who added a blue strip to include France in the original design. From 1931 to 1934, a horizontal version of the second design resembled the Spanish flag. As late as 1934, during Boris 1, a coat of arms was introduced into the flat version, which lasted until 1939. From 1939 to 1949, a variant of the 1866 flag was used, but with a different stripe ratio and coat of arms. 1949 to 1959, there was a variant of the flag from 1939 to 1949 with different colors. From 1959 to 1993, various designs were used until Andorra standardized its flag to join the UN.

The tricolor stripes are similar to the flag of France, and a wide central bar is identical to the flag of Spain. The flag is similar to the flags of France and Spain because it was administered by the two countries a long time ago. The coat of arms symbolizes an agreement between the Bishop of Urgell and the Count of Foix, allowing the spread of Christianity in Catalonia and Bearn provinces. The coat of arms has at the bottom right two red cows symbolizing the region of Bearn and a motto that says that “strength united is stronger.”

The flag of Colombia has three horizontal stripes. Yellow is usually at the top and covers half of the flag. Blue is the stripe in the middle and red at the bottom with the same width.

Colombia took over flag use in 1810 during the rebellion against Spanish rule. However, each area had its flag. In 1819, Colombia was granted independence and introduced a horizontal yellow, blue and red flag. In 1834, the flag would change from flat to vertical stripes with a white star, eight sides in the middle of the flag. Later, the flag was supplemented by a coat of arms. On December 10, 1861, the government changed the design to a horizontal yellow-blue-red banner without symbols. The yellow stripe occupies half of the flag. Signs on the flag were left for diplomatic services and not for the national flag.

Yellow symbolizes the riches of Colombia, including gold, harmony, serenity, justice, agriculture, and the sun. Blue symbolizes the sky, the seas, and the water that flows through Colombia, while red symbolizes the bloodshed during the struggle for independence. It also represents the persistence and determination of the people.

The flag of Mongolia consists of three vertical stripes of the same width. These stripes include a blue bar between two red lines. The left-red bar consists of a centered Mongolian Soyombo symbol. The Mongolian flag was adopted on January 12, 1992, but choosing the official colors was on July 8, 2011. Before 1992, the flag had a communist star above the Sojombo. Mongolia had a total of six flag designs.

Interpretation of the current flag

The Moldovan flag consists of blue, yellow, and red vertical stripes, and the yellow bar contains the coat of Moldova’s arms. The flag serves as the national flag, civil war flag, and ensign. It was adopted on November 6, 1990. The flag also has a coat of arms that consists of a dark golden eagle holding an Orthodox Christian cross with its beak, an olive branch on one of its wings, and a scepter in the other.

Colors on the flag symbolize three regions of Romania: Moldova, Transylvania, and Wallachia. The eagle symbolizes the Latin origin of the people, while the cross represents religion; the olive branch indicates peace, and the scepter symbolizes Wallachia, a historic region of Eastern Europe. The eagle has a European wild aurox surrounded by traditional symbols made entirely of gold on its chest. The aurox head symbolizes the power, independence, and pride of the people.

The flag consists of three horizontal bands of the same width, one after the other of red-blue and yellow. It was adopted on August 24, 1990.

The colors on the flag have several meanings.

Red stands for 1.5 million Armenians killed in the Armenian Genocide. It also represents the Armenian highlands and the citizens’ “struggle for independence, survival and the preservation of their Christian faith.

Blue symbolizes the pure sky. It tells the will of the people to live peacefully on their land.

Worldwide, more than ten countries use red, yellow, and blue colors on their flags. Some use only three colors; others use them in addition to other colors. Although flags are important symbols of national unity, the colors on the flags are also symbols with an underlying meaning. Although two countries may have identical flags, the overall purpose of the flags is different.

Next article - 30 Coolest Animal Names From The Wild »