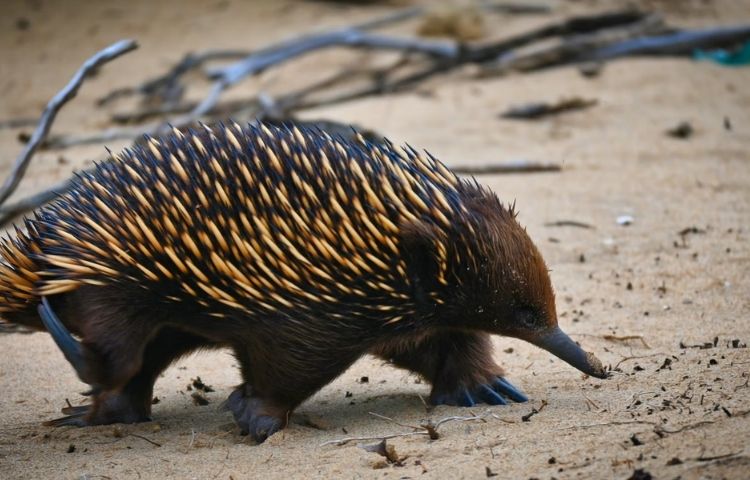 30 Coolest Animal Names From The Wild

The world is full of cool animal names and you must be surprised by reading the coolest 30 animal names emerging from the wild. What are you waiting for!! Dig deeper to know about these unique animal names:

Aardvarks are little pig-like creatures that can be found throughout Africa south of the Sahara in a variety of environments. They are mainly solitary and spend their days sleeping in underground burrows to avoid the African sun’s heat, emerging in the evening to hunt for food.

Another name for the baiji is the Yangtze dolphin, often known as the white fin or white flag. It is the only member of the Lipotidae family and belongs to the Mammalia class. A baiji is a bluish gray creature with a white underbelly. The majority of these marine mammals live in open water.

Caracals can be found in Africa, the Middle East, and India, among other areas. Its nearest relatives are the serval and the African golden cat. The black, tufted ears of a caracal distinguish it from most wild cats.

A dik-dik antelope is a tiny antelope. They live in Africa and are nocturnal. A dik-dik gets its name from a sound it makes when it’s scared. The plants that these animals chew provide them with the majority of the water they require. This wild creature has a lifespan of 5 to 10 years.

To survive, this species swims slowly and languidly through the water, chewing up the grass on the ocean floor. Its herbivorous lifestyle and placid demeanor have earned it the moniker “sea cow” or “sea pig.” The dugong may be vulnerable to human activities and coastal development, even though it is not currently threatened.

English cream golden retrievers are easy to train, sweet, and intelligent dogs. You’ll be able to bring home a one-of-a-kind puppy with a lovely beauty and a wonderful demeanor if you can find a trustworthy breeder.

Echidnas, often known as spiny anteaters, are one of just two mammals that lay eggs! The platypus is the other. Both animals are found in Australia, which is interesting. New Guinea is home to echidnas as well. Every other mammal produces live young. The echidna, like other mammals, nourishes its young with milk, is warm-blooded, and possesses fur.

The Feist is a little hunting dog that originated in the 18th century in the American south. The species’ name is most likely derived from the antiquated word fice or fyst, which means “to break wind.” This dog’s origins are unknown, however, there are several ideas as to how it was bred.

Gibbons are tree-dwelling apes that can be found all over Asia and Indonesia. Gibbons, also known as smaller apes as opposed to giant apes, are fast and agile, brachiating through the treetops at speeds of up to 35 mph (56 kph). White-handed, slamang, and lar gibbons are among the 18 species of an arboreal, or tree-dwelling, mammal.

Guppies are small tropical fish that can be found all around the world. Rainbow fish and millionfish are two names for them. The Poeciliidae family contains 276 different species of guppy. Guppies give birth to live babies.

Horgis are part of a huge breed of hybrid dogs that have been developed in the previous 25 years. Because they are the product of breeding popular purebreds, these hybrids are frequently referred to as designer dogs. Breeders desired puppies with the best characteristics of each of their parents. These dogs are classified as hybrids.

The Australian Koolie is a herding dog native to Australia. It is also known as the Coulie, Welsh Heeler, Welsh Merle, German Koolie, or German Collie. This hardworking breed excels in canine sports such as obedience, agility, herding, and flyball, and maybe taught for therapy, rescue, and detection in addition to herding animals.

The Ibis animal is a type of bird that can be found on all continents except Antarctica and is one of the 3most well-known wading birds in the world. There are about 30 different species that exist today, each with its own size, color, and other characteristics. Several species of ibis are now extinct, and others are considered endangered.

The jerboa is a small, jumping rodent that lives in the deserts of Northern Africa and Asia. Jerboas are really adorable animals with long ears, tails, and hind paws that give them a comical look. They also have kangaroo-like legs that allow them to move around by jumping.

The kakapo is the world’s only nocturnal and flightless parrot species. These parrots are forest-dwelling birds that have evolved totally in their native New Zealand habitat. The kakapo builds its nest in the shade of trees, in rock crevices, or inside hollow tree trunks.

The Lhasa Apso is a Tibetan small dog breed with a curled feathery tail and long, flowing hair that covers the eyes and reaches the ground. There are numerous color schemes that are widely acceptable, including black and tan, cream, golden, white, and red. The beautiful fur betrays its original duty as a guard dog for Himalayan palaces and monasteries.

A Pomeranian and a Chihuahua cross, the Pomchi is a one-of-a-kind dog. While these two breeds may occasionally spawn on their own, this dog is almost always the result of human intervention. In terms of appearance and temperament, the two breeds complement each other nicely.

The quoll is one of the many one-of-a-kind marsupials found only in Australia and New Guinea. The quoll’s evolution, like that of many other marsupials such as the kangaroo, was affected by the region’s geographical isolation and diversity. The quoll, on the other hand, has been under threat in its natural habitat for centuries. Fragile and endangered, these one-of-a-kind species may require conservationist assistance to live.

The Uguisu is a small bird endemic to Japan, China, and Taiwan, as well as a number of other far eastern countries. The Uguisu bird is also known as the Japanese Bush-Warbler because of its beautiful and peculiar singing. The Uguisu is most closely related to other little songbirds such as Bushtits and Nightingales, with whom it shares a striking resemblance in appearance, however, the Uguisu is slightly larger.

The Walrus is a big marine animal that lives in the Arctic Circle’s bitterly cold and icy waters. Walruses are the second-largest ocean-dwelling mammals that come onshore to breed after Elephant Seals, and their sensitive whiskers and long tusks set them apart from other pinnipeds.

Xerus erythropus, often known as the African ground squirrel, is a species of ground squirrel native to Africa. They are considered to be gregarious animals with coarse and short fur. They can live for about 11.5 years in captivity. Males and females live in separate groups until they mate, following which the kids are raised by their mothers in the females’ group.

The yeti crab has a crab-like appearance (hard shell, long appendages, and huge claws), yet it also looks like the mythical snowman for whom it was named.The small, all-white body, which measures about 6 inches long, and the long bristly claws that allow them to harvest bacteria are the distinguishing traits. Some have hairy chests in addition to or instead of hairy claws, as previously noted. It is assumed to be fully or partly blind due to its severely shrunken eyes.

The “Poor Man’s Racehorse” and “Lightning Rag Dog” are two names for the medium-sized breed. Although it is sometimes mistaken for a little Greyhound, the Whippet has a distinct deep chest and slender waist, and it is unknown which breed was used to produce it. Before making its way to New England with the coal miners, the Whippet was bred in Victorian England for rabbit hunting, but it was also used for lure coursing, amateur racing, and dog shows. The breed is calm, friendly, affectionate, and clever, making it an excellent family pet or city companion.

Stoats are little animals, but they are active and ambitious predators that may be found across broad areas of North America, Europe, and Asia. They favor moderate, cool, and cold climes, and they adapt to the cold by donning a characteristic white coat, which trappers have long referred to as “ermine” material.

A brood parasite, the brown-headed cowbird deposits its eggs in the robin’s nest and convinces the mother to raise its children instead of the robin’s own. The bird, on the other hand, is quite good at identifying and eliminating unwanted eggs from its nest. In the spring, the American robin is one of the first birds to deposit its eggs.

The Saola is an antelope species that is native to the woodlands of north-central Vietnam and Laos. They are one of the world’s most recently found big mammals, but they are also one of the rarest, with estimated population numbers in the tens of individuals.

These canines were bred for livestock guarding and herding. Because of their heritage, they are excellent family watchdogs. These dogs are experts at keeping jackals and other predators away from sheep and other livestock herds. Due to their remarkable scenting ability, they are also used on hunting expeditions.

Bichir fish are endemic to Africa, where they can be found in practically every freshwater body. Bichirs have become quite popular as aquarium pets due to their unusual features and highly engaged dispositions.

The Zorse is one of a variety of equine hybrids known as Zebroids, which is the term for a horse hybrid with Zebra lineage. The Zorse is the result of crossing a typically male Zebra (stallion) with a female horse (mare) to generate an animal with stripes that appears more like a Horse than a Zebra.

I hope you like the list of unique animal names which may sound funny and weird but you may be surprised to learn about these names.