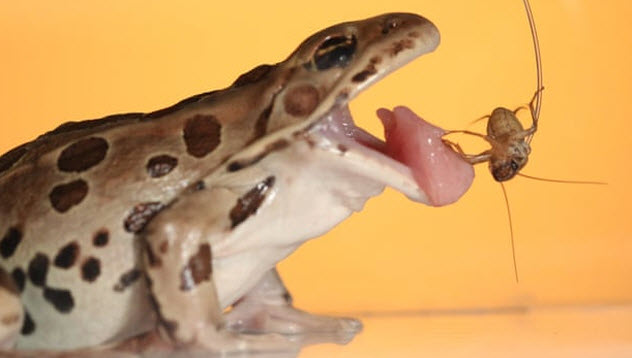 Top 10 Things that You Never Heard about Saliva

The bubbly saliva that forms in our mouths is a wonderful fluid capable of many tasks. It aids in the transfer of hormones, keeps our teeth intact and even retains our long-lost ancestors. Is it not fantastic that doctors have found uses of saliva as a vaccine or have modified it to make the world’s most powerful painkiller? Here are top ten things that you may not know about saliva.

When a frog darts forward its tongue to capture its prey, the saliva is thin. But as soon as the tongue retracts, the saliva turns thicker than honey. Scientists have found that this slimy consistency can be attributed in part to a high concentration of long-chain proteins.

Researchers have found that couples who kiss experience a significant drop in the hormone cortisol, that is responsible for stress, and an increase in bonding hormones (oxytocin) than those who did not. Analysis has revealed that spit contains testosterone which enhances sex drive.

To stay hydrated, body cells need to absorb fluids that have a lesser concentration of salts and solutes compared to those already in the body. Saliva does not fit the bill. Saliva may be 98% water, but it is not watery enough for the sustenance of life.

Not producing enough saliva may sound like a very simple problem but the consequences are not. Those with dry mouth experience speedy tooth decay and yeast infections among other nagging oral afflictions. Our teeth come under tremendous pressure during activities like chewing and grinding. Proteins in saliva make teeth slide into each other instead of stabbing directly at the enamel.

In 2006, scientists discovered a possible replacement for morphine in human saliva – a peptide called opiorphin. It improves the encephalin impact that is a natural painkiller in the body.

In 2016, a Chicago doctor Ming-Te Lin was found thinning oral vaccinations with vodka and feline saliva. Lin had been using alcoholic cat saliva in the belief that it could treat allergies, and none of his patients had complained.

In 2017, while studying mucin-7 based on sub-Saharan Africa, scientists came to the conclusion that in the ancient times, the homo sapien ancestors had mated with not so human something. As per the studies, this mystery species were even more distantly related to humans than Neanderthals.

Lyssinum is the saliva from a rabid dog. In 2018, a Canadian naturopath created a sensation when she claimed that she had used it successfully on a child. It alarmed conventional doctors as they said that there was no proof of lyssinum being a safe product.

In 2016, researchers discovered a new life-form, a microscopic goober inside human saliva. This bacteria, which is yet to be named, is a parasite that preys only on other bacteria.

Saliva that comes from tuberculosis patients is a hot item on the black market in South Africa. It is used by scammers to obtain disability grants from the department of social development. It is a thriving trade in the townships of Cape Town, where unemployment and poverty are rampant.

Surely, you must have not heard of these amazing facts about saliva before!