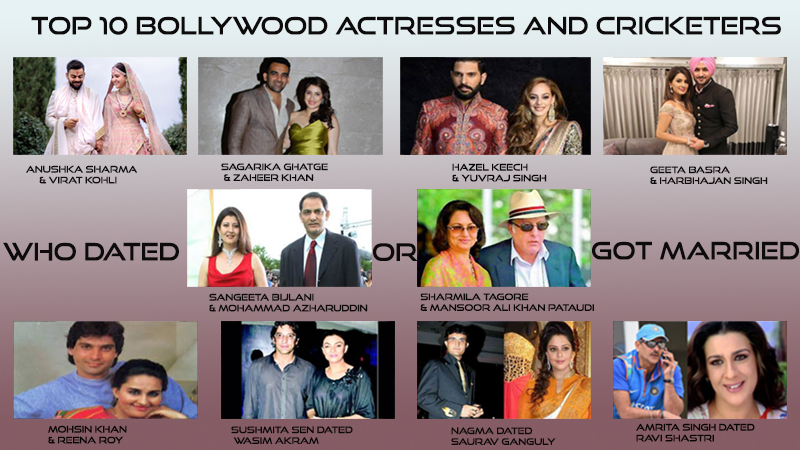 10 Bollywood Actresses and Cricketers Who dated or got Married

What an amalgamation of cricket and Bollywood altogether garnished with love! It is always a moment of excitement when media comes up with headlines of some celebrity getting married or is dating. The grand weddings are much-awaited events for the fans. The years 2017-18 ended with many such occasions when very popular souls like vogue artists from Bollywood or cricket tied the knot with each other. Apart from Deepika, Ranvir or Priyanka and nick, Anushka and Virat were also the ones whose wedding bells rang in a grandeur destination, bringing cricket and Bollywood squad together. This isn’t the first Bollywood- Cricket couple, but here is the list of 10 Bollywood Actresses Who Married Indian Cricketers. Social media gets stuffed with numerous adorable pre-wedding and wedding day pictures and honeymoon photographs as well. Let’s not waste time and follow a few of them right now.

One of the most talented and glamorous actress Anushka and the very ingenious Indian skipper Virat is a heavenly couple who initially denied their relationship but soon accepted their love in 2014. Virat Kohli and Anushka Sharma first met during a shampoo ad in 2013. But it was well noted when Virat passed a bat kiss to his lady love after scoring a half-century against Sri Lanka at Hyderabad. Finally, the two hearts exchanged vows in a private destination wedding in Italy on December 11, 2017.

Chak de India fame and national level athlete Sagarika married former Indian fast bowler Zaheer Khan on November 23, 2017, in Mumbai by simply doing a court marriage and a star-studded wedding reception. Since then they can be trolled on Instagram for captivating valentine and anniversary pictures.

One of the most lovely couples who joined the bandwagon and traditionally turned husband-wife in a Sikh marriage ceremony at the Fatehgarh Sahib gurudwara near Chandigarh on November 30, 2016. It was followed by royal beach wedding in Goa and an opulent reception in Delhi. The love was officially expressed by Yuvraj with a heart touching proposal and a sparkling solitaire ring in Bali for that surprised the gorgeous Model.

The beautiful love story began when Chennai Super King’s off-spinner Harbhajan Singh was starstruck after he saw Geeta in a music video ‘Woh Ajnabee’ from the movie ‘The Train’. The love, at first sight, turned to 10 months chasing his lady charm and after 5 years of dating, the cute couple was convinced to get married on 29 October 2015.

The two hearts fall for each other when the Ex-Miss India (1980), and actress met the tough-spirited Indian cricket player, Azharuddin in the commercial photoshoot. A soft-spoken, introvert young man from Hyderabad was clean bowled after meeting Sangeeta Bijlani in social events, parties, and flights. Well, it wasn’t easy for both of them as Azhar made costly material sacrifices for his divorce with Naureen and the lady herself was curing a broken heart at that time after her break-up with Salman Khan almost on the verge of marriage.

Another unconventional love story that flickers in our mind is about the Bengali Beauty Sharmila and the dashing royal blood, Mansoor Ali Khan Pataudi. He won many matches in the field but could not stop himself from losing his heart to the pretty dimpled face. And so after impressing her with rose, letters for 4 years and a proposal on the streets of Paris made Sharmila say ‘yes that leads the couple to get married on December 27, 1969

The 1980s actress Reena with mesmerizing eyes not only allured the fans but also the Pakistani cricketer Mohsin Khan. Both held a private wedding at Karachi in Pakistan and eventually blessed with a daughter named Jannat. As the years passed, disparities between both lead to separation in the 1990s

Nagma and Sourav’s romantic love affair became the gossip topic for many newspapers for some years even after the duo parted their ways mutually. Nagma, a successful name from the South Indian film industry was in a rumored relationship with Ganguly in the early 2000s till she admitted it now.

This might be a part of another rumored story but this is again a flashback that media once reported about the Indian Miss Universe (1994), Sushmita Sen and Pakistani cricketer Wasim romantic relationship. Although, Sushmita stated that she is fond of Wasim Akram and that both are good friends and not every man dear to implies that she has a relationship. Wasim is happily married to second wife Shaneira.

Back in the mid-80s, Shastri was carried away by Amrita Singh. One was a star at the cricket pitch, and Amrita was busy signing film in abundance while they met and romance bloomed between the two. Soon, Ravi and Amrita got engaged in 1986 but it was short lived and due to professional priorities, the couple shut the story off.

Hope that these love stories were interesting. Love is a blessing and marriage is that blessing come true. Do fall in love once and experience the paradise of wonderful feelings. A perpetual Cricket Bollywood wedding match is such an instance to quote the beauty of heartfelt relationships.