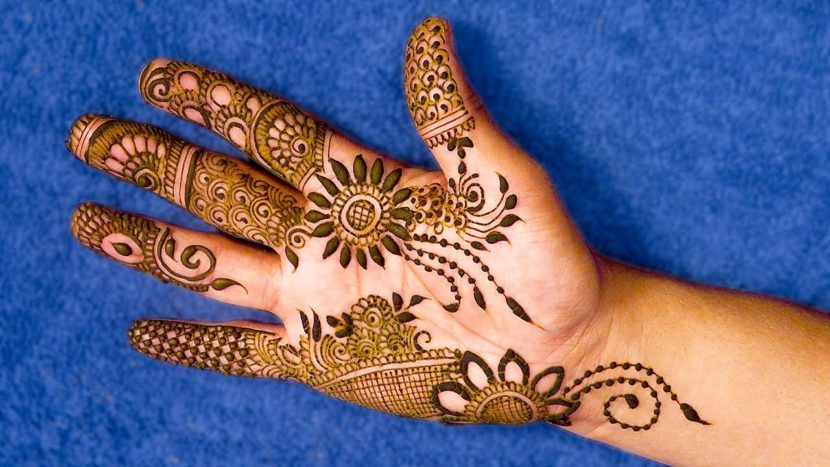 The word Mehndi has been derived from the sanskrit word, that is, mendhikā. Mehndi is extremely popular in the east but is being recognized in west as well. In the west, mehndi got more popularity after diverse songs on mehndi and the ceremony related to the same began to be launched in various Bollywood movies. Most of the celebrations in countries like India remain incomplete in the absence of an event that calls for applying mehndi on the hands of women and at time on hands of men as well. At time of wedding, there is an entire function that is dedicated for the same. Here we are going to discuss different types of popular Mehndi Designs.

if you are also interested in applying mehndi on your hands but have peculiar choice then it is important that you know about different types of mehndi designs. There are some types of designs that are highly elaborate while these are some which are spaced and less detailed. Know all the types of designs and then decide which one is the best for you.

Indian mehndi designs are undeniably beautiful and elegant. These are comparatively more elaborate and at the same time condensed. The details that these designs carry are relevant in a plenty of ways offering detailed information about the rich cultural heritage that India enjoys.  These designs are mostly inspired from mother earth, nature as well as emotions. The carvings are made on hand in the shape of birds and animals primarily peacocks and elephants. Some draw the figure of sun and Kalash and a lot more things that have some significance.

Arabic mehndi design trace the origin back to the Arab world. Instead of being finely detailed these are spread and primarily feature the cashew patterns. Apart from his there is about a lot of shading. It is also commonly known as the Mughlai mehndi design and a lot of people love applying such designs on their hand.

western mehndi design are an inspiration from the western world,. These are highly creative designs that demonstrate the western culture. The western designs basically comprise of the geometric shapes as well as the quirky patterns and designs that are intimate jewellery patterns. You can also see the same in the form of diverse tattoos and stamps that are just to be dipped in the mehndi mixture and stamped on the hands or area where one wishes to apply the mehndi.

The indo western mehndi designs again a fusion but again for our benefit. It is a perfect blend of the east and the west. This people usually wear as an epitome of style statement. These designs stand completely contrary to the traditional patterns. not only is the motif of the design more spaced but ta the same time it concludes patterns that re comparatively more modern forms of what we call traditional designs.

Moroccan mehndi design is basically an inspiration from the traditions of the tribal symbols. The patterns also find association with the ones that the tribals use. These share similarity with the western tribal tattoo art. Primarily these comprise of the zig-zag lines in addition to geometric curves plus the quirky aesthetics. One of the most prominent features is the diamond shape. Despite the fact that these mehndi designs are not elaborate but are still extremely beautiful. Owing to the fact that these designs lack a monotonous touch of being feminine these are a popular choice among men as well.

All in all, these are the different types of popular Mehndi Designs that you must know prior to deciding which one suits you the best.

Next article - Top 10 Most Effective Tips for Dark Mehndi Colour »