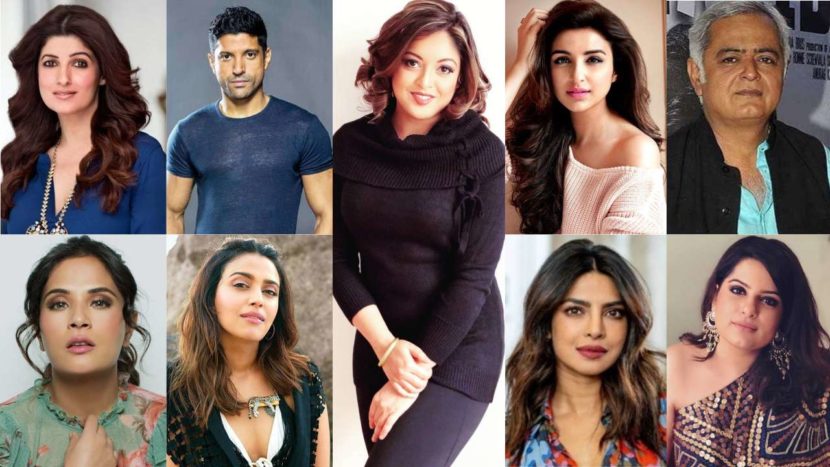 For many Tanushree Dutta Harassment Case is actually a burning issue while there are few who are taking it as one of the biggest Entertainment News 2018.  Indian Media and Entertainment industry has always been respected world wide but I guess such a behaviour by few is actually deteriorating its image. Recently Released and Upcoming Movies like all those that have been seen by us till now, not only comes up with an idea to sell on the screen but with many hidden stories off the screen. Here we are going to discuss about top 10 bollywood stars who support Tanushree Dutta.

Janice Sequeira says in a post on twitter, the much used social networking platform as that, “Some incidents that take place even a decade ago remain fresh in your memory. What happened with #TanushreeDutta on the sets of “Horn Ok Please” is one such incident – I was there. #NanaPatekar”.  With such a support for Tanushree Dutta is the much talked about Tanushree Dutta Harassment Case, more of the celebrities have come forward in support of hers. Though there are big popular stars like Amitabh Bachchan and Salman Khan who have simply shied away from saying or posting any comment on this case, there are a handful of others who have stood up for Tanushree Dutta to support her in her fight against the iconic Nana Patekar.

He says on a social networking site, “ This thread is very telling. @janiceseq85 was there at the time of the incident being debated today. Even when #TanushreeDutta had career concerns to keep quiet 10 years ago she did not & her story hasn’t changed now. Her courage should be admired, not her intention questioned.”

Priyanka Chopra writes in support of the post by Farhan Akhtar which goes as follows, “ This thread is very telling. @janiceseq85 was there at the time of the incident being debated today. Even when #TanushreeDutta had career concerns to keep quiet 10 years ago she did not & her story hasn’t changed now. Her courage should be admired, not her intention questioned.” She says, “Agreed..the world needs to  #BelieveSurviviors”

She says via social platform, “ I believe #TanushreeDatta and @janiceseq85 recollection of the account. Janice is my friend, and she is anything but an exaggerator or a liar. And it’s upto us to stand together.”

Parineeti Chopra has following to say, “I agree too. Survivors are survivors because they have dealt with something horrible and come out on the other side. So believe them, respect them. @janiceseq85 #TanushreeDutta”

RichaChadha writes, “ Have had an issue with him and his temper before… I suspected it was the same person. Violence is not ok, facing the camera while deflating the tyre is impunity… he’s banned from any Press event I do henceforth.”

He writes, “If my previous tweet sounds vague let me clarify it. This should stop the questioning of intention of Tanushree Datta because there is a witness account of what happened and @janiceseq85 is as credible as the come. “

“I am not here to pass judgement. That’s neither my place nor my intention. I appreciate her courage to speak about alleged harassment that has been caused to her. It’s her and the accused’s fundamental right to speak about their experience of the same situation. Such dialogue is very healthy and it will bring about a lot of awareness.” These are her words in support of Tanushree Dutta.

“Agar koi insaan bol rha hai khul ke is baare mein then we should hear that person out.. it takes great courage to talk like that so I applaud that courage,”  says Varun Dhawan on Tanushree Dutta & Nana Patekar incident.

She wrote, “Seeing this footage for the first time. Shudder to think what she went through. Her face showing such brave calm. There is a goon with a camera in his hand ? Was he a media person? Trace these scumbags even now, register a case, lock them up. What are the cops standing by watching?

With a post on social networking, she has also come forward in support of the actress. “The more women speak up, the more it will give confidence to others who have been abused and will also serve as a deterrent to those who have felt they can get away with it. For me, #TimesUp is a better move as it doesn’t solely put the onus on the victims and instead invokes a sense of shared responsibility in all of us – both men and women.” She elaborates, “As an afterthought, maybe ‘better’ is not the right word. For me, #TimesUp is a movement that resonates more than the others because it has a sense of shared responsibility.”

All in all, these are the top 10 bollywood stars who support Tanushree Dutta. With believe that with passage of time more and more stars will join the list and support the actress in this controversy.