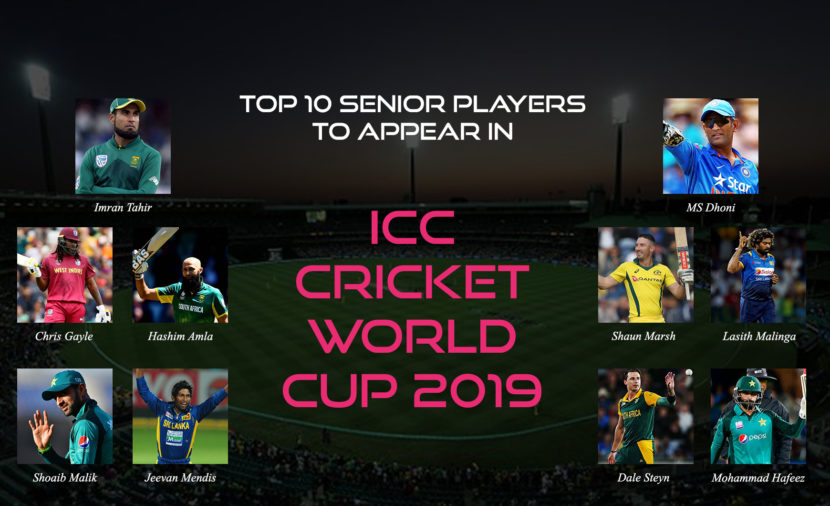 The much-awaited ICC Cricket finally landed to the grounds with 10 stupendous teams keeping an eye gaze towards the prestigious World Cup. What an incredible scene witnessing a stadium in England rich in welcome roars, national anthem, cheerleaders, happily shrilled audience and phenomenal players from across the world. Cricket is a game of skills, fitness, and practice but no game can be won by intelligence, temperament, and endurance. Every player has gone through many ups and downs to get their own country’s flannels and bring honor. Every team is under the guidance of some of the experienced senior players who understand the game strategies well. An efficient team is the one that is not only good at playing cricket but is also courageous to fight the tense atmosphere together, thereby turning it to triumph. We have discussed here The Top 10 Senior Players to Appear In ICC Cricket World Cup and somewhat about their performances. Let us take a look at the real heroes, their age and skills.

Pakistani Born South African cricketer, Tahir first celebrated his birthday on 27 March 1979 and is the eldest player of ICC. Imran Tahir is an amazing spin bowler and a right-handed batsman. His enthusiasm at this period of the age is commendable. On 15 June 2016, Tahir was declared as the first South African bowler to take seven wickets in ODI, and the fastest to reach 100 ODI wickets. It is a privilege of watching him playing with complete energy and strength. Sadly, he might retire after the World Cup.

West Indies ODI team without the opening batsman Chris Gayle (21 September 1979) is skeptical to imagine. Chris is one of the greatest batsman known for his sportsmanship and numerous records set by him. Although he has announced to retire after 2019 world cup, he has been serving the country and entertaining audience from everywhere across the lands for decades since his ODI debut in September 1999 against India. He owns the cricket world like a champion. He shots balls into the air like a plane flying high in the sky masks within the clouds.

Mohammad Hafeez, born on 17 October 1980 on the lands of Punjab forms an important part of the bowling attack and is one among the best all-rounders. He had made tremendous victorious contributions to Pakistan’s glory since his Test and ODI debut in 2003 with the bat and the ball. To give his best ever performance in ICC World Cup 2019, he recently took off from Test cricket

India’s pride and the cricket star of the millennium, Mahendra Singh Dhoni was gifted to the nation on 7 July 1981. He is exceptionally meritorious and smartest of all. He cannot be replaced by any player till date.  Under his captaincy, India won the 2007 ICC World Twenty20, the 2010 and 2016 Asia Cups, the 2011 ICC Cricket World Cup and the 2013 ICC Champions Trophy. When it seems that India might lose the match, Dhoni plays a superhero and a ray of hope to turn the battle in favor. A right-handed middle-order batsman and best wicket-keeper think from behind the stumps but keeps his foot forwards to play magically.

Shoaib Malik, the former captain is a blessing to the current Pakistan cricket team. He was born on 1 February 1982, Malik received an honor of being the highest run–scorer in T20I for Pakistan on 13 September 2017. He is one of the most reliable batsmen who manages to bat in any position, and a very good spin bowler with about 150+ wickets in the ODIs. In 2018 Caribbean Premier League tournament, he became the fourth batsman to score 8,000 runs in T20s

It is obviously a surprise to see Jeevan playing 2019 cricket cup as he directly jumped off from one cup(2015) to the other(2019) and not a single match meanwhile.

After some ultimate players like Muralitharan, Rangana Herath, and Sanath Jayasuriya SriLanka has been served brilliantly by Jeevan Mendis, born on 15 January 1983. He is an all-rounder who bowls leg spin and is a left-handed batsman.

Super smart Steyn was born on 27 June 1983. He excels in all formats of the game and is referred to as the greatest fast bowlers of all time. ICC Test Cricketer of the Year 2008 and Wisden Leading Cricketer of the Year 2013, Steyn knows how to rule the game by firing balls like bullets. But with the rise, he also met some inevitable hurdles by breaking his right shoulder in Perth Test in 2016, and he had to miss the ICC Champions trophy 2017 in England. Then injured his left heel, nevertheless he did a stupefying comeback and he crossed the record of South Africa’s leading Test wicket-taker surpassing Shaun Pollock’s 421 wicket record in December 2018.

Shaun Marsh(born 9 July 1983) is a famous left-handed opening batsman. Trapped in so many controversies, he had to get in and out of the team several times, but still, he managed to maintain a good batting average of 41+. After his debut in 2008, Marsh has played 71 matches and will turn out to be a responsible batsman. With Steve Smith, David Warner return to the squad and Shaun in form defines Australian team as a major contender for the ICC Cricket World Cup 2019.

Lasith Malinga, born on 28 August 1983 is the tenth oldest players to be an essential part of the ICC Cricket World Cup 2019. A man named specialist death bowler and Malinga the Slinga say all about him. It would be breathtaking to announce that with unbelievable ability to take consecutive wickets, with in-swinging yorkers, he is the only bowler in the world having two World Cup hat-tricks, three hat-tricks in ODIs and four wickets in four consecutive balls in any form of international cricket.

They inspire the youth and instills a message that age is a no bar for passion.  They have proved themselves as assets to their countries and will continue to be. Determination and team power are in their blood. They are the ones who know the secret to rescue the team out of the complications. These were the top 10 oldest yet the most ferocious players in the ICC Cricket World Cup 2019.