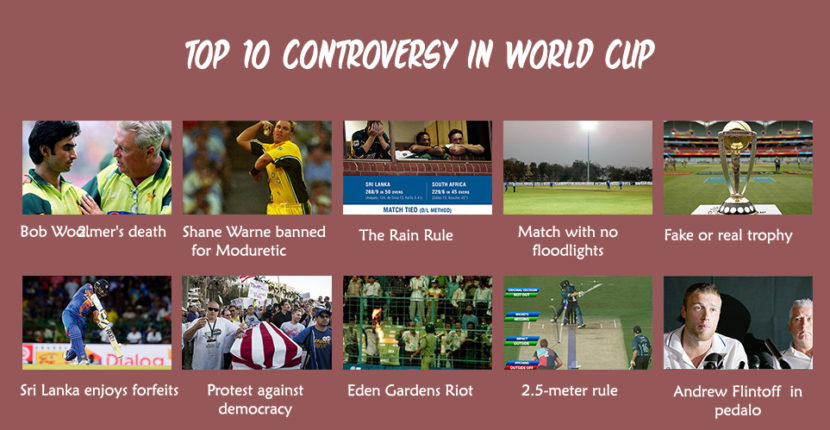 Nothing goes without the controversies shrouding the same and so is the case with Cricket World Cup. Here we are with Top 10 Controversy In world Cup that you must know.

During the world cup of 2007, Bob Woolmer who was the coach of Pakistani Cricket Team, on 18 March 2007 was found dead in the hotel room at Jamaica Pegasus Hotel in Kingston. The reports claimed that he died of asphyxia through manual strangulation.

Shane Warne was banned from the World Cup of 2003 as he was tested positive for having consumed the banned drug, Moduretic. It was given to him by his mother for his enhanced appearance.

The Rain Rule stated that in case the rain-affected match then the considered to be least-productive from the side of the team who batted first will be discounted which put the second team batting on severe disadvantage.

4. Match with no floodlights

Darkness took over the World Cup of 2007 played at Kensington Oval, Bridgetown, on a ground that had no floodlights. Having played the 20 overs, when it got dark the teams were called for playing the left overs the next day which according to few was not required.

Having struggled for 28 long years, India was able to win the ICC Cricket World Cup trophy but it was claimed that they were awarded the fake replica of the trophy as the real one was at the government godown seized by  Mumbai Customs on its arrival from Colombo as import duty was to be paid for the same. It was hard to figure out whether the one at the stadium in the godown was the real one.

In 1995 Tamil Tigers bombed the Central Bank, owing to which Australia and West Indies being concerned about their safety decided to forfeit 1996 Cricket World Cup which led to Sri Lanka getting those points for the matches.

In 2003 Zimbabwe skipper Andy Flower and Henry Olonga were seen wearing black armbands during an opening match in Zimbabwe. This they called, “mourning the death of democracy in Zimbabwe.” It was a protest against the presidency of Robert Mugabe. England boycott the match owing to security issues.

In 1996 during the Cricket World Cup, India stood against Sri Lanka and the defeat of India seemed almost inevitable. The spectators at Eden Gardens threw bottles on the playground and set the stand on fire. Being unable to control the crowd, Sri Lanka was awarded the match.

During the World Cup of 2011 when the distance between the point of impact and stumps used to be 2.5 meters, the controversy aroused when the rule was revised during the tournament.

In World Cup of 2007, Andrew Flintoff lost the vice-captaincy of England in addition to receiving a one-game ban for taking the possession of a pedalo while he was intoxicated. According to the reports he was rescued after he fell from the pedalo.

All in all, these are the Top 10 Controversy In Cricket world Cup that you need to know.