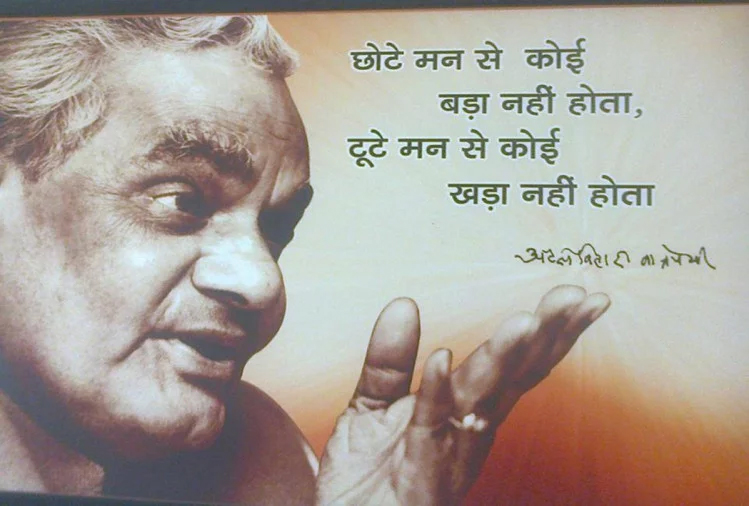 Not only was Atal Bihari Vajpayee a former Prime Minister of India but person with unmatched talent at writing poetry. He is  one of the best statesman that our nation has ever produced. Apart from being efficient at polictics Atal Bihari Vajpayee was also an excellent orator. There is no speech that he has delivered from which we have not been able to highlight the quotes. In the era where people ask someone else to write a speech for them, Atal Bihari Vajpayee required none. We wonder if he ever prepared a speech. Each time he opened his mouth, it appeared as if the words automatically slipped of his tongue. These were so thread together that it left the listeners completely spellbound. Today when the man has left to his heavenly abode we can expect no more sayings from him. However, for sure can cherish the ones that we already have. Here is a list of top 10 most inspirational quotes by Atal Bihari Vajpayee. These we have compiled based on his speech on several occasions.

“I dream of an India that is prosperous, strong and caring. An India, that regains a place of honour in the comity of great nations.” The world knows that he always wanted to see India as a developed nation and strong in all respect.

“Victory and defeat are a part of life, which are to be viewed with equanimity.” Disheartenment was never a part of his dictionary.

“Empowering the individual means empowering the nation. And empowerment is best served through rapid economic growth with rapid social change.” He did not wish for only a strong individual but a firm society and a stronger nation.

“If India is not secular, then India is not India at all.” He believed that it is not just the words that count but the actual circumstances that matter.

“Quiet diplomacy is far more effective than public posturing.” He always believed in te saying that pen is mightier than a sword.

“No guns but only brotherhood can resolve the problems.” Violence was never his take and he always used the weapon of his intelligence and words to make India follow the path of progress.

“Ours is a multi-religious country, a multi-lingual country; we have many different modes of worship. We believe in peaceful and harmonious co-existence.” According to him, harmony and peace are the two important parameters that can make a nation successful.

“We believe in equal respect for all faiths.” A person can never be judged for his opinions. If you have one then other person might hold the opposite idea and there is nothing wrong with it.

“Poverty is multidimensional. It extends beyond money incomes to education, health care, political participation and advancement of one’s own culture and social organisation.”  He believed that it is not just the lack of money that makes you poor.

“It requires an effort of logical acrobatics to believe that carnage of innocents is an instrument for freedom and elections are a symbol of deception and repression!” All in all, these are the top 10 most inspirational quotes by Atal Bihari Vajpayee. You can count on these quotes whenever you need a bacon light to guide you. The man of words and inspiration might not be among us today but his words will always remain grounded in our heart and mind preventing us from going astray ever.