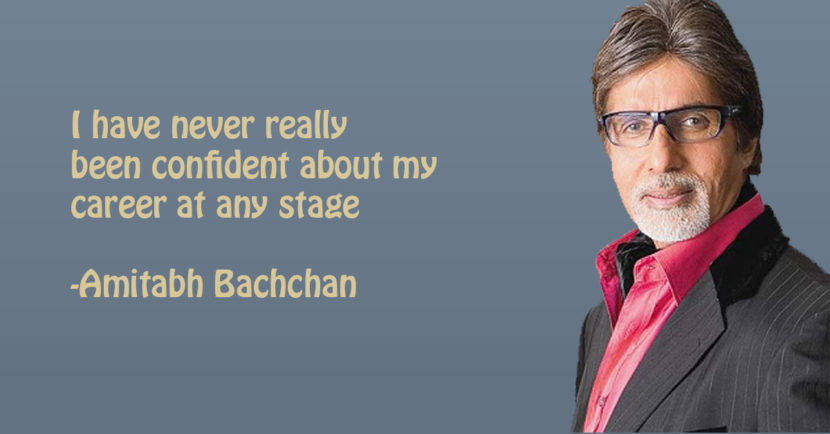 Amitabh Bachchan is the most popular veteran actor of Indian Cinema today. The actor is not only known for his acting skills but also for his writing. The thoughts that he pens down are actually the inheritance from his established writer father. There are a lot of saying by the veteran actor that has always fetched attention. These are quotes that are inspiration to few and motivation to some. Here we are with few of the popular quotes. The top 10 most popular quotes by Amitabh Bachchan are as follows:

Because you are women, people will force their thinking on you, their boundaries on you. They will tell you how to dress, how to behave, who you can meet and where you can go. Don’t live in the shadows of people’s judgement. Make your own choices in the light of your own wisdom.

I just lead my life as naturally, as normally as I possibly can. But I can’t help it if controversy is hounding me day in and day out. I’m quite amazed sometimes by the way they go about it. I grow a beard and it lands up in the editorial in The Times of India.

Coming together should be considered something positive for people and communities. When thoughts come together, that can be more positive than an individual thought.

If you represent a fantasy for the people who actually go to the cinema, they grab that and go with it; therefore, for the rest of their lives, they actually identify you with a certain thinking – a certain philosophy. There are many actors who want to pursue that same thought in real life as well, and that’s perfectly acceptable.

Indian actors, because of the format of our stories, need to be good actors, and be able to perform emotional sequences, do a bit of comedy, dance and singing, action, because all of this forms just one film. In many ways I’d say there are greater demands on Indian actors than there are on Hollywood.

Obviously, you look for something that is commensurate with your age. You know that you can’t be playing the young hero anymore, and you have to be relegated to something smaller and something elderly, and you just try and do your best.

All in all, these are the top 10 most popular quotes by Amitabh Bachchan that you must read or go through. To have more such articles you can leave your suggestions in the comment section below.

Next article - Top 10 Must Know Facts About Deepika Padukone »