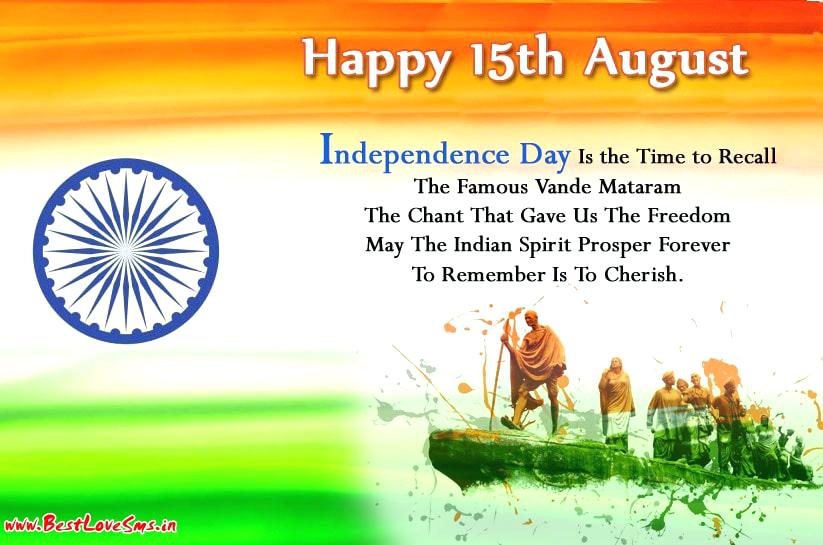 A few days from now we will be celebrating the must awaited independence day. The day that set us free as a democracy and laid the foundation of what we today are. Like every other festival or event calls for a whats  app status upload or status upload on facebook, instagaram or any other social networking sires to show case your excitement then this one event deserves it too. Understanding what crucial role the status plays for you we are here with the best Independence Day quotes. These are the most popular quotes yet the most unique quotes on Independence Day. These will surely make posting a photo on the social networking site an easier task. On top of this, status with a good tag line showing your love for the nation will boost your post. Here we are with the best patriotic quotes for you. The following are the top 10 best and unique quotes for independence day.

1.    Essence of freedom and the power of freedom

“It is by the goodness of God that in our country we have those three unspeakably precious things: freedom of speech, freedom of conscience, and the prudence never to practice either of them.” This quote has been given by Mark Twain who is popular for his novels.

2. Freedom is a legacy

“Freedom is never more than one generation away from extinction. We didn’t pass it to our children in the bloodstream. It must be fought for, protected, and handed on for them to do the same.” this saying has been brought to us by Ronald Reagan.

3. Spirit of equality on this day

“We hold these truths to be self-evident: that all men are created equal; that they are endowed by their Creator with certain unalienable rights; that among these are life, liberty, and the pursuit of happiness.” These are the words of one of the most eminent personalities,Thomas Jefferson

4. Boost to what is wanted not just offered

5. Cages are not meant for us

“Some birds are not meant to be caged, that’s all. Their feathers are too bright, their songs too sweet and wild. So you let them go, or when you open the cage to feed them they somehow fly out past you. And the part of you that knows it was wrong to imprison them in the first place rejoices, but still, the place where you live is that much more drab and empty for their departure.”

“For to be free is not merely to cast off one’s chains, but to live in a way that respects and enhances the freedom of others.” You can rightly use these words of Nelson Mandela

“I do not agree with what you have to say, but I’ll defend to the death your right to say it”, are the words rightly prompted by Voltaire.

“Nothing is more difficult, and therefore more precious, than to be able to decide.” This has been said by Napoleon Bonaparte.

“Freedom is never voluntarily given by the oppressor; it must be demanded by the oppressed.” These are the words of Martin Luther King Jr.

This one is the saying by the popular personality Lech Walesa. It goes as follows,  “We hold our heads high, despite the price we have paid, because freedom is priceless.”

All in all, these are the top 10 best and unique quotes for Independence Day because these depict what you have in mind.  You can use these as your status besides simply making them your tagline. Also,  you can make these a part of your best independence speech. You may either begin your speech by making use of any one of these quotes or else you may use these in the conclusion because these will ameliorate your speech.  You may also use these as fillers as these are appropriate. In case you have a better quote in mind that we did not cover in our list then you may leave for us the comment.

Next article - Top 10 Most Popular Patriotic Songs from Bollywood »