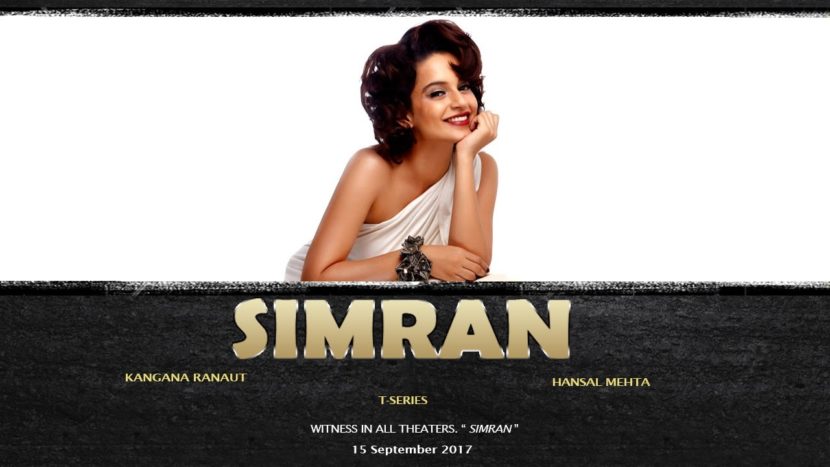 September 2017 is the month to enjoy exciting movies from Bollywood. With many upcoming Bollywood movies, it is difficult to know which the best to save for a good, enjoyable watch.  No need to search for a list! Here are the top ten latest Bollywood movies coming in September.

This list has been carefully selected, sifted to suit your taste and preference and leave you mesmerized.The selection was made with your favorite actors and actresses in mind, as well as diverse genre of movies, straight out of Bollywood. Take your popcorn and let’s do this!

If you are into a little Drama, Crime and Romance, Simran is a blend of the three. Directed by Hansal Mehta, the film features the amazing KanganaRanaut as a Gujarati housekeeping lady in the U.S.A whose ambition gets in the way of sanity and gets involved in crime. Experience the drama, laugh at the epic comedy and have a taste of Romance in this movie set for release on 15th September.

This action movie will leave you clutching at your sit for more. It is a story of four families facing challenges in their small crime-laden, corrupt town. Their belief in God and destiny leads them to participate in a rally that is set to change their lives forever. How will a rally bring the change?

Starring Sanjay Dutt, Aditi Rao Hydara, and directed by Omung Kumar. The movie to be released on 22nd September, is a revenge drama centred on the relationship between father( Sanjay) and daughter( Aditi, Bhoomi).  The drama unfolds when Aditi, who is to marry, is sexually assaulted. The quest for justice by Sanjay will leave you amazed but even more will the last seconds, of the film in court.

On 1st September hits the amazing love story of a couple that fell in love, produced by Aanand L Rai. Everything is beautiful until when the groom discovers he suffers from erectile dysfunction. Will love stand the test of time or will the test stand in the way?  There is only one way to find out.

This movie brings in a gist of music, drama and crime. Featuring Farhan Akhtar, an intruiging story of prison break unfolds. Set in jail in Lucknow, a group of prisoners form a musical band, and their adventures, are worth the watch.

A series of blasts in Hyderebad leads to a formation of special ATS team led by officer Desai. The team seeks to arrest YasinDarji but mistakenly arrests Sameer. What starts off as mistake leads to a series of drama as Sameer is given freedom in exchange for being a mole to track down Yasin. How does it end? 15th September is the D-day.

The unique story starring VarunDhawan, unfolds about twins separated at birth but connected by reflex.  The two re-unite at adults and are set to take down the underworld of the smuggling world. How will they do it?  The action and comedy is too much to miss out.

The Hindu word meaning ‘kings’ in English is the title of the action thriller film co-directed by Milan Luthria.  The film is centered to the emergency era of 1975. Rani Gitanjali is raided of her gold and the action sequences follows. What does the government have to say? Who is guilty and who is not?

This movie has taken three years to craft. The star Arjun Rampal mirrors a true story of a former gangster who seeks to become a politician. The enigmatic figure he becomes gives him the title ‘daddy’. But how? Past mistakes will not stop him. Watch out.

Closing  the list- poster boys. The comical movie produced by Talpade features Sunny Deol , Bobby Deol and Talpade himself. The movie inspired by real life of three porters who found their pictures on vasectomy porters will crack your ribs.

From the look of things, September brings with it exciting movies from Bollywood and its stars. The above movies to be released are Epic and are sure to stand out. Be prepared for a thrilling moment of a blend of drama, comedy, thriller and crime. Whatever your taste in movies is- Bollywood got you sorted!