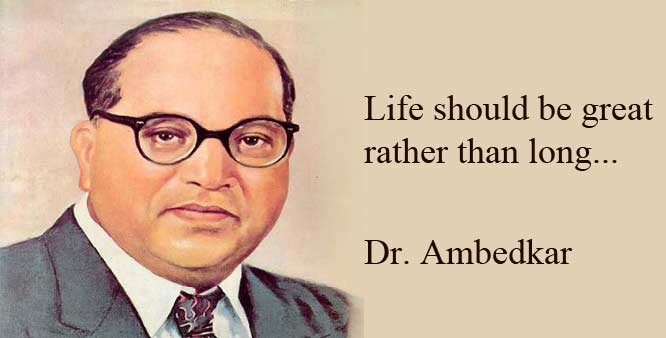 “Religion must mainly be a matter of principles only. It cannot be a matter of rules. The moment it degenerates into rules, it ceases to be a religion, as it kills responsibility which is an essence of the true religious act,” said Bhim Rao Ambedkar. Mr. Bhim Rao Ambedkar  is popularly known as Babasaheb Ambedkar. He is one of the popular faces and leaders of Independent India. the fact that we are remembering him on the occasion of our approaching Republic Day, that is, January 26th is that it was him who flagged the Indian Constitution. Here we are with a presentation of some of the best sayings by him that you can use as your whatsapp and Facebook status on the occasion of Republic Day.

That the caste system must be abolished if the Hindu society is to be reconstructed on the basis of equality, goes without saying. Untouchability has its roots in the caste system. They cannot expect the Brahmins to rise in revolt against the caste system. Also we cannot rely upon the non-Brahmins and ask them to fight our battle.

My social philosophy may be said to be enshrined in three words: liberty, equality and fraternity. Let no one, however, say that I have borrowed by philosophy from the French Revolution. I have not. My philosophy has roots in religion and not in political science. I have derived them from the teachings of my Master, the Buddha.

No Hindu community, however low, will touch cow’s flesh. On the other hand, there is no community which is really an Untouchable community which has not something to do with the dead cow. Some eat her flesh, some remove the skin, some manufacture articles out of her skin and bones

The reason why Broken Men only became Untouchables was because in addition to being Buddhists, they retained their habit of beef-eating, which gave additional ground for offence to the Brahmins to carry their new-found love and reverence to the cow to its logical conclusion.

People are not wrong in observing Caste. In my view, what is wrong is their religion, which has inculcated this notion of Caste. If this is correct, then obviously the enemy, you must grapple with is not the people who observe Caste, but the Shastras which teach them this religion of Caste.

History shows that where ethics and economics come in conflict, victory is always with economics. Vested interests have never been known to have willingly divested themselves unless there was sufficient force to compel them.

All in all, these are the top 10 Popular Quotes By B.R. Ambedkar that you must read on the occasion of Republic Day.