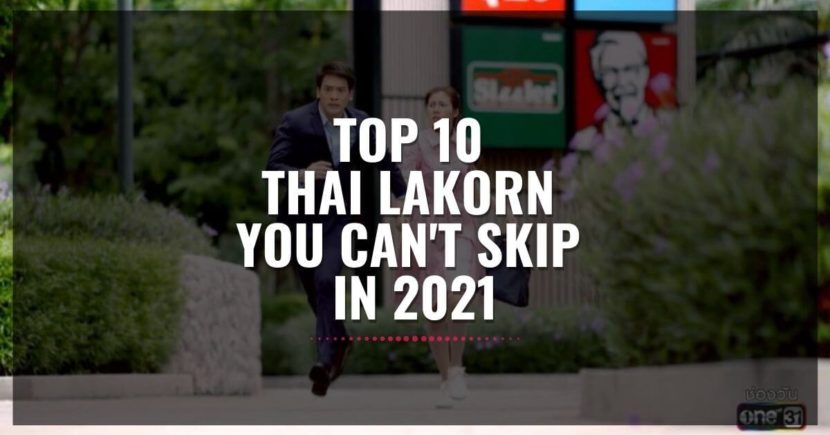 Serials and television dramas have been a favorite of most housewives. But over time, viewership of TV drama has grown exponentially. Since the times, these television dramas have started coming up on different applications, teenagers and working professionals also find out time to enjoy these dramas on their smartphone.

With different online streaming services coming up now, you can not just explore the television dramas of your country but also of some other countries. One such country that is trending quite much in the context of such television dramas is Thailand. There are so many drama options available that you can check out and enjoy.

Here is a list of the Top 10 Thai Lakorn or commonly known as Thai dramas that are too hard to ignore in 2022. 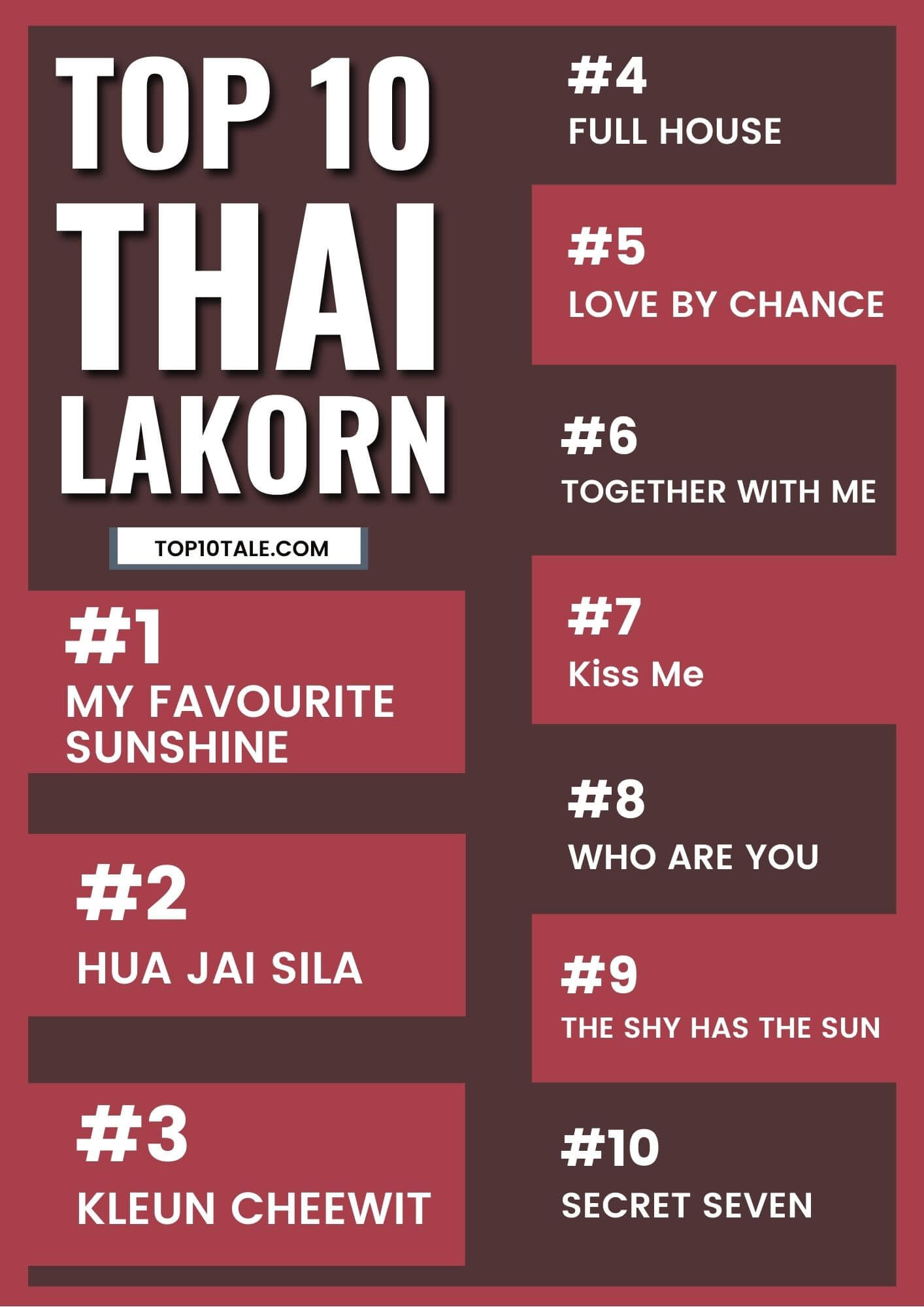 If you have a habit of watching Thai Lakorn, you must be familiar with this very famous drama My Forever Sunshine. This romantic drama has acquired a pretty good rating from the audience.  The most interesting part of this drama is that it is not like any usual romantic drama and has an interesting plot.


My Forever Sunshine is a story of a young girl Paeng. When she lost her father, she had to go and stay with Artit. But for doing so, the only way out was to be with Artit. Paeng took the initiative in getting into a connection with Artit, but in doing so, Artit met a life-threatening situation. This made Artit made hate Paeng so much that Paeng had to leave him and go away.

A twist comes up when after four years, Paeng meets Artit once again. But the hatred that Artit had for Paeng earlier was still there. The story reveals later on what happens between both of them. It is quite interesting to see whether they will come together with each other or Paeng will again have to continue with her tragic life.

Another Thailand Lakorn that is trending since 2019 even till now is Hua Jai Sila. It is more of a character-centric drama that majorly revolves around the main character of the drama Tor. This character is the son of a mistress from a very wealthy man. Due to this, Tor did not get the respect and the position in society that the son of a wealthy man should deserve.

The story is about how Tor created a false story of his death to return back in the future with much strength. When he returns back, the only motto in his life is to take revenge on everyone who abused him in the past.

There are many other characters who have some significant roles in the drama but Tor has always succeeded in grabbing the attention of the audience towards him. The mixed feelings of his heart are very well reflected on his face and the viewers are very well able to get connected to the character.

Hua Jai Sila is also available under the English title Man of Vengeance. More than 97% of the viewers have liked this drama and still many people are binge-watching it. Due to the amazing acting of the lead role, the drama has been also nominated for many of the awards.

Some stories never get old. Kleun Cheewit surely is one such drama that is still gathering love from the audience across the world. This was stated as the best Thai lakorn in the year 2017. This drama lasted from 23rd January till 13 March 2017. Some of the eminent actors who starred in the drama were Prin Suparat, Louis Scott, toey Jarinporn, and Urassaya Sperbund.

At the time when this drama was released, it got quite famous and even now there are many viewers who love to see this drama. Overall, this romantic drama has a review rating of 96%.

Kleun Cheewit has been derived from a novel of the same name. Also, another drama was made earlier to this new one. Moreover, it can be said that this particular drama is the remake of the earlier drama that came up with the name Khluen Chiwit.

The story starts with an accident where the main characters are introduced. As the story progresses more characters are revealed. Also, with the progress of the plot, several twists and turns are introduced that keeps on making the storyline much interesting. The plot grips the audience well and has something to new offer in every episode. There were 15 episodes and surely the audience stays stuck up to the drama till the end.

If you wish to watch Thai lakorn online, you can start with the series Full House. This 2014 TV drama has 20 episodes and has some worth admiring twists and twirls. It may happen that you may find this drama similar to many other stories today. But way back in the year 2014, this concept was quite fresh and the audience loved watching it. With a rating of more than 80%, this television drama is worth watching.

As a small summary, the story is about the character Aom who went out to Korea for some reason and by the time she came back home, she found that her house is sold out to a person called Mike. She enters into a contract marriage with Mike only with the purpose of getting her belongings back. But as the story progresses, things change between Aom and Mike. The relationship of contract marriage developed into a relationship of care and feelings. It is quite interesting to see the journey of this couple in the drama.

If you are bored with the same romantic stories, Love by Chance is the new Thai lakorn concept that you can binge-watch. Though this is again a romantic drama but not of a usual couple. This is a story of a gay couple who met by chance and fell in love even when they did not want to.

Pete is the character who is introduced at the starting. He is a handsome man from a wealthy family but is shy because he is aware of the fact that he is gay. Due to his shyness, many of his friends used to take advantage of his wealth. But then entered the character Ae with the episode where Pete meets an accident with Ae’s bike. Ae helps Pete and soon they become friends. As their friendship nurtured, Ae started protecting Pete from people who used to take advantage of him. But soon this care transformed into attraction.

Pete was aware of the insult that gays have to go through in society. Hence, he never wanted Ae to go through this and so Pete never wanted to accept his mutual love for him. But as the episodes progress, the equation between both the characters change, and what happens ahead is something that you should know by watching this series.

Another Thailand drama that can be suggested is Together with Me that came up in the year 2017. This is a series that can also be stated as a bad romance. The story is about two childhood friend who meets up again at the college. Everything was going all good until one fine day.

One night after sessions of alcohol, both the friends get too much drunk and end up into sex. This incident creates a lot of confusion between the other characters of the story also. The drama has 13 episodes and is something fresh to watch.

Kiss me a cute little teenage romantic drama. Again this is something different in the thai lakorn list. This drama from the year 2015 got quite famous among different teenagers and college-goers.

The main character is Taliw who is a schoolgirl and is known for her clumsy behavior. But soon arrives the character Tenten in the school who is a genius. Taliw gets attracted towards Tenten but Tenten always teases her. He also at times embarrasses her in front of others. On the other hand, Taliw’s best friend also proposes to her. How will Taliw deal with all these and what happens at the end is an interesting thing to watch.

Looking for the latest thai lakorn? Who are you is the option that you can go for. This romantic drama is a bit different from the usual romantic stories and will make you want more with each passing episode. The story is about an orphaned girl who is fade up of her life and wants to end her life. In the process, she does not die but losses her memory.

Now she is living with a new identity and meets different people. In different new friends that she makes, she falls in love with an athlete while another friend of hers helps her in getting back her lost memories. But as she starts getting back her memories, she reminds back all her pains in life.

Here comes another thai drama from the year 2020 that you can surely binge-watch. It is mainly a family drama where romance is also a part. The story is about a family where the father leaves his wife and son for some other woman. The son Paul decides to take revenge on him and he comes across the new wife and daughter of his father. He starts winning the trust of the new wife of his father to get revenge. In the meanwhile, he unintentionally also gets close to the daughter Nainapha and finds out that she was adopted.

The story takes a turn when Paul comes to know that the new wife has only planned plots to destroy the family and the Nainapha is also a victim of this toxic situation just like him. Among all this confusion, Paul and Nainapha get close and get into a romantic relationship. Now he gets into the trial whether he will reveal the truth of the new wife of his father or will save his relationship.

If you have been craving to watch one of the best romantic thai lakorn series, Secret Seven is surely one of the drama series that you can watch. Padlom is a lonely school girl who is not comfortable with romantic relationships. Moreover, she is scared of falling in love. But life takes a turn for her when someone told her that there is someone who secretly admires her.

It was her who had to find out who this secret admirer of her was. The only hint that she got was that the secret admirer was from seven young men who used to be around us. Now she starts exploring them out and tries to find out the right person. Will she succeed in getting in touch with the right person who actually admires her? Will her new love story start? It is quite exciting to find out the answers. Watch the drama to find these answers and enjoy an experience that you may have never known before.

So, here is the list of the best thai lakorn series that you can enjoy anytime. Though some of them are quite old, still they are interesting and have a great plot so that you can enjoy them even today. There are so many of these series that are trending on Youtube channels and other areas now in different parts of the world apart from Thailand.

But if you have already seen some of these drama series and you are looking for some fresh content, you can also check out the options for thai lakorn 2022. Some of the thai drama series that you can check out from the year 2022 are- Wo Ai Ni Tur Tee Ruk, Not Me, 46 Days, and many many others.

The Thailand drama series are liked by many people across the globe as they have lesser episodes and they usually have a plot that keeps the viewer stuck up to the series. Explore more of these series to enjoy some of the best stories.

- Previous article « The Magnificent Autumn Shades in the Netherlands in 2020