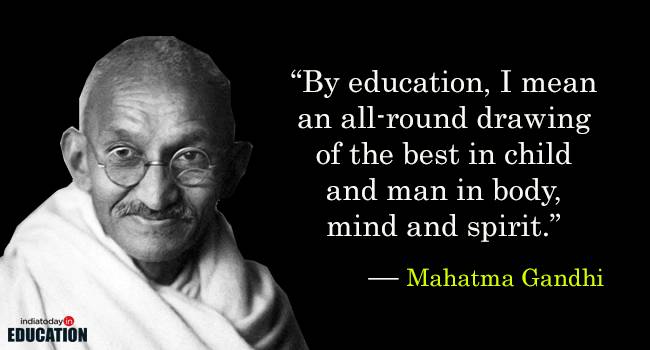 In a democratic scheme, money invested in the promotion of learning gives a tenfold return to the people even as a seed sown in good soil returns a luxuriant crop. These lines have a deep insight into them if you analyse them properly. Such lines can be a product of a personality that is replete with knowledge on each and every aspect of life. You have rightly guessed that these are the words of one of the most eminent personalities, Mahatma Gandhi. Though he has put forth his opinion on diverse issues and spheres of life, yet here we are going to specifically talk about top 10 views of Mahatma Gandhi on Education.

Mahatma Gandhi was of the opinion that, “An education which does not teach us to discriminate between good and bad, to assimilate the one and eschew the other, is a misnomer.” Also he claimed that, “Education should be so revolutionized as to answer the wants of the poorest villager, instead of answering those of an imperial exploiter.”

Mahatma Gandhi asserts that, “Education in the understanding of citizenship is a short-term affair if we are honest and earnest.” Also, he believed that, “Basic education links the children, whether of cities or the villages, to all that is best and lasting in India.” further he asks, “Is not education the art of drawing out full manhood of the children under training?”

Literacy in itself is no education said the great man. According to him, literacy is not the end of education nor even the beginning. He believed that, “Literacy education should follow the education of the hand—the one gift that visibly distinguishes man from beast.” Also he says, “Real education has to draw out the best from the boys and girls to be educated.”

True education must correspond to the surrounding circumstances or it is not a healthy growth says the eminent personality. He claims that what is really needed to make democracy function is not knowledge of facts, but right education. also, he asserts that national education to be truly national must reflect the national condition for the time being.

According to him, the function of Nayee-Talim is not to teach an occupation, but through it to develop the whole man. Also, he said that, “I believe that religious education must be the sole concern of religious associations.” He said, “By education I mean an all-round drawing out of the best in the child and man—body, mind and spirit.”

By spiritual training I mean education of the heart says he. Other opinions of the man on the same goes as follows, “Experience gained in two schools under my control has taught me that punishment does not purify, if anything, it hardens children.”

“I consider writing as a fine art. We kill it by imposing the alphabet on little children and making it the beginning of learning.” Also, the man goes on to say that, “ I do regard spinning and weaving as a necessary part of any national system of education.”

He says that, “The aim of university education should be to turn out true servants of the people who will live and die for the country’s freedom.” Also, his notion is in the favour that, “A balanced intellect presupposes a harmonious growth of body, mind and soul.”

He says that, “Love requires that true education should be easily accessible to all and should be of use to every villager in this daily life”. Not to forget that he says, “The notion of education through handicrafts rises from the contemplation of truth and love permeating life’s activities.”

He says, “Persistent questioning and healthy inquisitiveness are the first requisite for acquiring learning of any kind”. Also he believes that, “If we want to impart education best suited to the needs of the villagers, we should take the vidyapith to the villages.”

All in all, these are the top 10 views of Mahatma Gandhi on Education. “The fees that you pay do not cover even a fraction of the amount that is spent on your education from the public exchanger ”, this is a perfect saying to sum up the articles. You must never forget that all education in a country has got to be demonstrably in promotion of the progress of the country in which it is given and these are again the thoughts of this great man. The schools and colleges are really a factory for turning out clerks for Government. If there are other sayings and thoughts of this great personality on education that we have forgot to cover then you may leave the same in the comment section below.