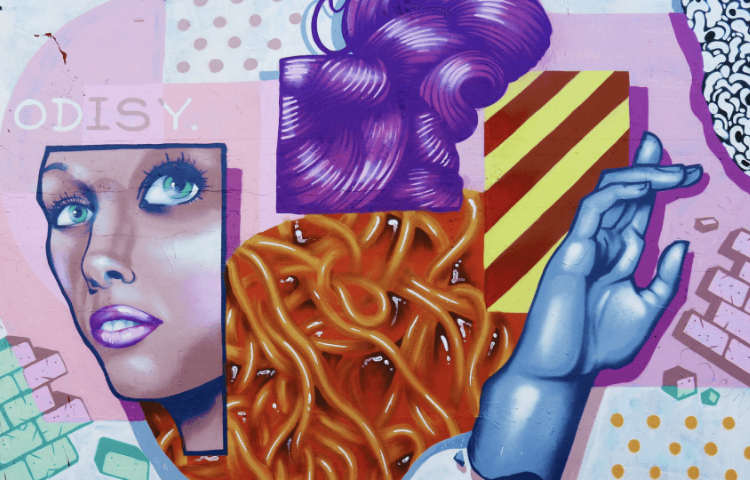 We seek to stay in constant evolution because graphic design trends can shift from one moment to the next, and what was relevant yesterday may not be relevant today.

We asked you if you were a user of social networking sites like TikTok, Pinterest, or Instagram a while back because there were becoming more articles on those platforms with the word “aesthetic” in common.
Today we’ll be a little more specific, showing you not one, not two, not three, but ten different varieties of aesthetic graphic design styles. Popularity is pounding on your door! Turn the knob, open the door, and let the magic of graphic design in.

What Is Aesthetic in Graphic Design?

Aesthetics is “a collection of concepts concerned with the nature and appreciation of beauty, especially in art,” according to Oxford Languages. Because art and beauty are both subjective concepts, aesthetics is understood through the prism of our perception and admiration for them rather than rationality.

For example, we instantly think that a banana that is properly shaped and looks perfectly ripe and yellow tastes nice just by looking at it. On the other hand, we presume that bananas that are deformed or discolored taste unpleasant, therefore we don’t buy or eat them.

Furthermore, aesthetics is a visual science, so it can be applied to anything visible to the naked eye. From the natural objects we see outside to the things we make physically or digitally, including graphic design, there is something for everyone. Graphic design does, after all, need to be useful since it solves visual communication issues. However, the design does not have to be monotonous!

Making a design appear beautiful just for the purpose of looking good can be a positive thing, especially if you’ve already met the design’s functional goals, such as clear text, the right layout, and appropriate images. The confluence of practicality and aesthetics is what design is all about. It brings together the objectivity of function with the subjectivity of aesthetics to produce a logical and creative product.

You can add artistic features to your design through aesthetics, which will improve its visual attractiveness. It can give your design a sense of individuality and character that strictly practical design cannot. When it comes to designing with aesthetics, you can begin by considering design components that you believe consumers would find appealing.

Listed below are the ten popular types of aesthetic graphic design that you must follow in 2022:

Stranger Things and It seem to have pushed 80s nostalgia back into the mainstream not long ago, ushering in an era of gothic serifs, neon colors, and vaporwave landscapes. The 90s have finally made a comeback in 2022 (and have lately been romanticized on Netflix’s Fear Street). The 1990s are making a comeback in many forms.

This movement, however, is based on nostalgia—that longing, idealized look backward. To that aim, we’re reliving the 1990s using Memphis design patterns, simplistic emoticons, and basic internet frames. Bright color blocks and oozing slime bring back fond childhood memories. Turn the dial back to the 1990s whenever your design project asks for a sense of ease with a touch of old-school style.

Designers have been looking for ways to breathe new life into the flat vector artwork mandated by digital design standards for years. The designers of 2022 are drawing influence from historical flat design pioneers, particularly Japanese Edo Period Ukiyo-e artists. Ukiyo-e is a printmaking technique that uses hand-carved woodblocks to create artwork. The Great Wave off Kanagawa is a well-known example of the style. Bold outlines, flat colours, and limited perspective approaches were frequently used, all of which are known to vector artists.

Graphic design relies heavily on patterns. They can be used to break up plain colours and give a background more visual interest. Designers are using parametric geometry to bring statement patterns to the forefront in 2022. Parametric patterns are complex geometric constructions in which each line morphs in response to its relative position. The style is effectively based on graphs of parametric equations. These patterns are fluid and three-dimensional, giving them a sense of movement rather than architectural rigidity, despite their geometric roots. Parametric patterns are employed in 2022 designs to depict the complexity of their subject matter, whether it’s human communication or identification.

This graphic design trend takes a look back at the heady early days of the internet through the eyes of digital natives looking to break out from cookie-cutter templates, even if it means creating purposefully disorienting design. This, I believe, is design growing, taking into account societal developments such as social conventions and even inclusivity.

While anti-design isn’t quite the Wild West, Veguilla-Lezan believes it allows non-designers to confront established gatekeepers. “It’s making a more friendly environment for folks who aren’t ‘traditionally’ trained in design or who didn’t attend a large design school,” she says. “Those individuals are free to do anything they want and are not bound by the social norms imposed on us without our consent. However, there are seasoned designers who are aware of the restrictions and purposefully ignore them for the same reasons.”

The mysterious metaverse is one concept that has made its way onto practically everyone’s list of graphic design trends for 2022. Some of the above-mentioned tendencies may begin to unravel in the metaverse. While we’ve discussed a backlash against technology, the reality is that people will continue to use their phones and will likely become even more linked in new ways. While some firms are still flattening their logos for digital use, they may find that they desire to return to 3D in the digital metaverse.

Although it’s tempting to equate maximalism with its antithesis, minimalism, this trend accomplishes far more than you may expect—true to its name. Maximalism is about not simply filling space, but filling it with objects, colours, and patterns that reflect the artist’s inclination. It’s similar to how hoarding might reflect a lifetime’s worth of mementos that only the hoarder understands. Through related interior design movements like “grand millennial,” the style has been growing for a long time.

In essence, the designer focuses on the individual elements, and when we look at the whole thing, we get a jumbled smorgasbord showcasing their cumulative and sometimes conflicting tastes. In this way, it is an unashamed style, displaying all facets of a designer’s aesthetic palette. While it is a trend, it has true staying power: with so many aspects vying for your attention, fresh discoveries are always on the horizon.

When your mind wanders during a zoom presentation, doodles are more than just random shapes. What you doodle can reveal a lot about yourself. The designers of 2022 are integrating a piece of their own abstract mindscape into their professional work with these meandering doodles. This can help to bridge the gap between digital technologies and a human touch, resulting in more approachable designs. At the same time, this does not have to be incompatible with digital design—tools like animation can serve to evoke the doodling process’s freeform sketching nature.

Last year, we saw designers use inventive journeys into nature to get away from stay-at-home requests. They’ve gone deeper and deeper into fanciful universes since then. The designs that result are pure escapism in its purest form. Escapism’s allure stems from its intrinsic wonder, not merely from the retreat itself. Unexpected colours, intriguing settings, and imaginative character designs abound in this style. It’s a means for both designers and spectators to have their imaginations stretched. While this is mostly an illustration trend, it can be useful for label and website background designs. The objective is to populate these worlds with dense, interesting imagery that draws viewers in as they explore.

Another style that harkens back to the 1990s, but from the perspective of young people, is Frasurbane—a combination of the 90s American sitcom Frasier with the word “urbane.” It looks at GenXers who were finally settling down in cities and earning enough money to partake in some high culture at the time. Frasier’s Seattle apartment, for example, contained a grand piano, a modernistic fireplace, and a statement column, all set against a beige backdrop. Although the trend has mostly been confined to the field of interior design, 2022 will usher in the Frasurbane into graphic design.

Stately serifs, subtle colours, and carefully placed design components are used to represent it here. This is a trend that aspires to be both stuffy adult refinement and youthful city-dwelling hipness at the same time. It does not reject traditional aesthetics in favour of disorderly chaos (as do anti-design groups), but it is far more of a culture-loving showoff than minimalism. When taken too far, the approach can come out as snobby and pretentious, much like Frasier himself. Frasurbane can contain a measured maturity when done correctly.

Graphic design trends in 2022 may appear to be very random on the whole. What they all have in common is a massive 90s flashback, from anti-design and parametric patterns to candy hues and excessive bubble doodles and they are aesthetically beautiful. These distinct design trends will undoubtedly distinguish the following year in design.

It will be fascinating to see how this global community of designers collaborates to develop fantastic designs in 2022.