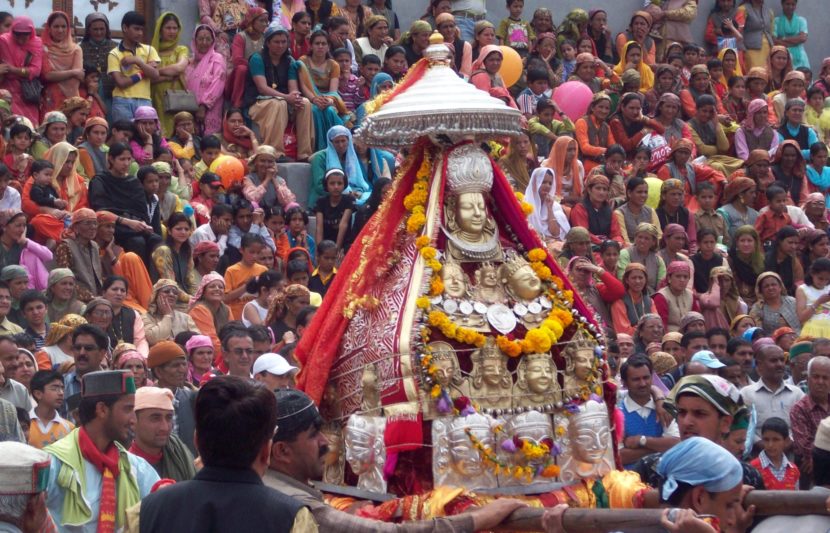 Festival is one way to keep engrossed in things and find out new ways to celebrate this event termed as life. All over the world and especially in India several festivals occur throughout the year. Though many of the festivals are celebrated all across the nation but there are many which have a special significance to the particular regions. Starting in the month of January, the celebrations begin and halt in the month of December and thereby the cycle of celebrations that never ends starts again.

Certain festivals that are most popular in Himachal Pradesh

Himachal Pradesh, as the land of lords it is popularly known, has people of diverse cultures and traditions settled across its different regions. Each year hundreds of festivals are celebrated throughout the world. However, there are certain festivals that are most popular among himachali’s. The list of 10 such festivals of himachal pradesh is presented here:

This festival is also popular by the names of Dholru and Chatrali as called by the people in the local and the interior regions of Himachal Pradesh. It is celebrated throughout the state in the first month of the lunar year. It is regarded as the symbol and the gateway of happiness. It is considered as one of the most important festival and people enthusiastically celebrate the same.

Celebrated most probably in the last week of February, Lossar is the festival that represents the beginning of a New Year. It is celebrated throughout the state with great enthusiasm and zeal. Also, the Tibetan colonies join in the celebrations as it is equally important for them as well. Local people enjoy their level best as this festival is accompanied by the pleasures of multifarious mask dances and dramas. The speciality is the Chham dance. People actively participate in the festivities of the day.

One of the most important festivals of Himachal Pradesh, it occurs in the month of September. It begins on the fourth day of September each year. The main attraction of the festival is the village deity that is worshipped by the villagers. Each village has its own deity whom they please via singing and dancing with full dedication and devotion. In regions of Shimla, Kinnaur and Sirmaur people worship Mahasu Devta.

It is a festival that is celebrated in the month of December or January. The festival is the charm of several places in Himachal Pradesh especially the regions of Chandra and Bhaga valleys. People burn the sticks of pencil and thin cedar to form a bonfire which is equal if not more than the pompous celebration of Diwali. The bonfire plays the significant role in the festival.

This festival of Nawala is celebrated to thank Lord Shiva who showers his blessings during the adversities by protecting the people and keeping them safe. The households usually keep collecting the money throughout the year and when they have appropriate funds at their disposal they celebrate this festival by keeping awake the entire night and praising Lord Shiva via singing devotional songs. It is the most popular festival among the Gaddi tribe of Kangra, Chamba, Kullu and Mandi Popularly known as “Rakhri” throughout Himachal Pradesh, rakhi is celebrated with great love and affection throughout the region in the month of Shrawan every year when the full moon occurs or to say in simple words the month of August. Sisters tie the sacred thread on wrist of their brothers by getting a promise to be loved and protected always. With burning the effigy of Ravana as the remarkable custom of the festival, it is celebrate enthusiastically by people throughout the state of Himachal Pradesh. It usually comes in the month of October which is then in one form or the other celebrated by bursting of crackers until the arrival of Diwali. Kullu Dussehra is the most popular festival not only in the state but across the boundaries. People from far off places visit kullu especially to enjoy this festival.

People wait the year- long for the festival of Diwali which is then celebrated in Himachal Pradesh in a lavish and on a very grand scale. Lakshmi puja is the prominent highlight of this fest which is usually done in the evening by all the members of the family followed by distribution of sweets and the bursting of crackers. Wearing new clothes and decorating the house is also an essential aspect of the festival. Celebrated on the 1st of Magh as you say in the local language and more appropriately in the mid of January, lohri is celebrated with full warmth throughout Himachal Pradesh. The festival continues for 8 days which symbolizes the beginning of the festivities. It is accompanied by dance and musical celebrations. The lohri song remains the main focus of attraction along the lohri loot that remains popular among children.

A nine day festival followed by spiritual celebrations is not only famous in other states of India but s equally celebrated with great pomp and show in Himachal Pradesh. Maa Durga remains the focus of all the people as they do their level best to please the Goddess. The celebration of this festival is accompanied by a fast that is kept by those who has an inevitable faith in the Goddess and the visits that are paid to the temple. People usually tend to keep fast as per their devotion and convenience. Fasting for all the nine days is not at all mandatory.

These are the festivals that people of Himachal Pradesh keenly wait for throughout the year in order to get a chance of coming close to the God and of getting an opportunity to spread love and affection. One thing that remains common in all the festivals is that God and Goddess plays a prominent role. People usually celebrate these festivals with the main purpose of thanking the God for the showers of blessing and showing the gratitude.