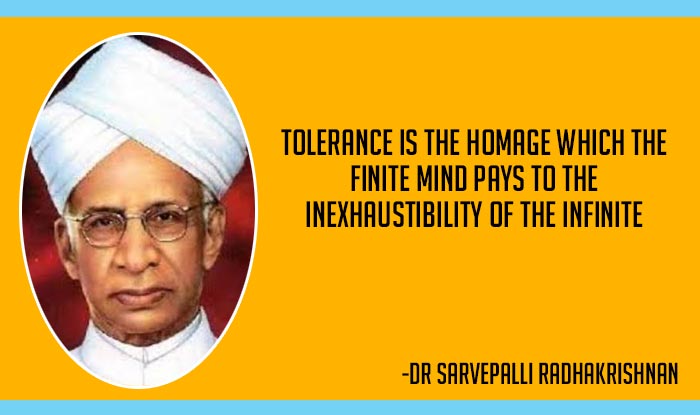 Sarvepalli Radhakrishnan is the man whose existence is celebrated on September 5 every year in the form of Teachers Day. He believed that  the true teachers are those who help us think for ourselves. He said that instead of celebrating his birthday, it would be an honor and a proud privilege to him if 5 September gets observed as Teachers’ Day. It is quite often that we get to read good quotes and sayings like, “The worst sinner has a future, even as the greatest saint has had a past. No one is so good or bad as he imagines.” You will be amazed to know that all these are the words of no one else but the very eminent personality, Sarvepalli Radhakrishnan.

Not many of us know the hardships that Sarvepalli Radhakrishnan had to undergo when he was a child. He was born and brought up in a Tamil brahmin family. His father had in mind that he will make Sarvepalli Radhakrishnan a priest though, the man himself had different aspirations. He later pursued philosophy not because he had an interest in the same but because one of his cousins provided him the old books as he had graduated in the same field from the same college and Sarvepalli Radhakrishnan himself had no money to purchase the books. Later he got married to one of his cousins but she also soon passed away. His political career was also replete with hardships and while he was serving the office, India had to face two wars, one with China and the other one with Pakistan.

The man had a lot to say about the religions. Hinduism is not just a faith. It is the union of reason and intuition that can not be defined but is only to be experienced. Evil and error are not ultimate. There is no Hell, for that means there is a place where God is not, and there are sins which exceed his love.

He had his own philosophy on the aspect of life and death. The word Atman (Soul) means the “breath of life”. Atman is the principle of man’s life, the Soul that pervades his being, his breath, his intellect and transcends them. Atman is what remains when everything that is not the self is eliminated. It is the unborn and immortal element in man, which is not to be confused with body, mind or intellect.

He had a completely diverse perspective about life and humanity and how it leads to civilization. Before we can build a stable civilization worthy of humanity as a whole, it is necessary that each historical civilization should become conscious of its limitations and it’s unworthiness to become the ideal civilization of the world.

Sanskrit has moulded the minds of our people to the extent to which they themselves are not conscious. Sanskrit literature is national in one sense, but its purpose has been universal. That was why it commanded the attention of people who were not followers of a particular culture.

It is the intense spirituality of India, and not any great political structure or social organisation that it has developed, that has enabled it to resist the ravages of time and the accidents of history. He is known to serve the nation at different designation and he has also contributed a lot to the growth and development of the nation.

Homeopathy did not merely seek to cure a disease but treated a disease as a sign of disorder of the whole human organism. This was also recognized in the Upanishad which spoke of human organs as combination of body mind and spirit. Homoeopathy would pay an important part in the Public Health of the country along with other systems. Medical facilities in India are so scanty that Homoeopathy can confidently visualize a vast field of expansion.

The self (Soul) is the constant-witness consciousness. Through all months, seasons and years, through all divisions of time, the past, present and future the consciousness remains one and self luminous. It neither rises nor sets. The ultimate self is free from sin, free from old age, free from death and grief, free from hunger and thirst, which desires nothing and imagines nothing.

Into the bosom of the one great sea Flow streams that come from the hills on every side, Their names are various as their springs And thus in every land do men bow down To one great God, though known by many names.

Hinduism is wholly free from the strange obsession of some faiths that the acceptance of a particular religious metaphysics is necessary for salvation, and non-acceptance thereof is a heinous sin meriting eternal punishment in hell.

Just as the Atman (Soul) is the reality underlying the conscious powers of an individual, so the Supreme Soul (God) is the eternal quiet underneath the drive and activity of the universe.

All in all, these are the Top 10 Most Popular Sayings By Sarvepalli Radhakrishnan. He always said that, “ It is not God that is worshipped but the group or authority that claims to speak in His name. Sin becomes disobedience to authority not violation of integrity”. It is hard to believe that such a great philosopher had to spend his last years in loneliness and despair. There was a lot of loneliness and depression that surrounded him while he was planning to leave on a heavenly abode. Be what so ever the hardships that he had to face, the popularity that he enjoyed among his students is the only reason that on  his birthday we celebrate Teachers Day every year.