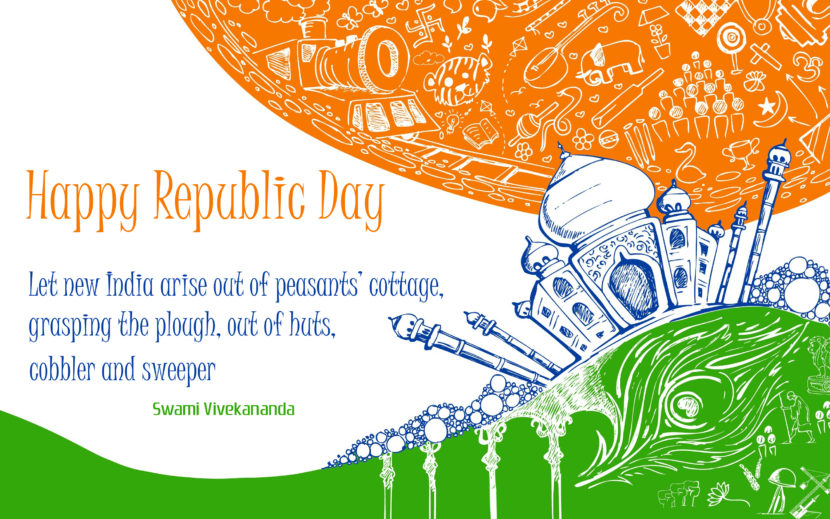 Republic Day is an occasion in India that is celebrated with great pomp and show on January 26th. It was on 26th January, 1950 when the Constitution of India came into existence, thereby declaring India as not only a Sovereign but also the Socialist and Secular Democratic Republic. “I feel that the constitution is workable, it is flexible and it is strong enough to hold the country together both in peacetime and in wartime. Indeed, if I may say so, if things go wrong under the new Constitution, the reason will not be that we had a bad Constitution. What we will have to say is that Man was vile,” said B. R. Ambedkar highlighting the importance of Republic DAY for India.  Like him there are many more well know personalities who have put forth their opinions on the importance of this day which today serve as inspirational sayings for the youth. On this occasion we have for you some of the beautiful sayings that demonstrate the importance of Republic Day. Here are the top 10 famous saying on Republic Day of India.

“How can one be compelled to accept slavery? I simply refuse to do the master’s bidding. He may torture me, break my bones to atoms and even kill me. He will then have my dead body, not my obedience. Ultimately, therefore, it is I who am the victor and not he, for he has failed in getting me to do what he wanted done.”

“We end today a period of ill fortune and India discovers herself again. The achievement we celebrate today is but a step, an opening of opportunity, to the greater triumphs and achievements that await us. Are we brave enough and wise enough to grasp this opportunity and accept the challenge of the future?”

“Whenever I have read any part of the Vedas, I have felt that some unearthly and unknown light illuminated me. In the great teaching of the Vedas, there is no touch of sectarianism. It is of all ages, climbs, and nationalities and is the royal road for the attainment of the Great Knowledge. When I read it, I feel that I am under the spangled heavens of a summer night.”

“She (India) has left indelible imprints on one fourth of the human race in the course of a long succession of centuries. She has the right to reclaim … her place amongst the great nations summarizing and symbolizing the spirit of humanity. From Persia to the Chinese sea, from the icy regions of Siberia to Islands

Where The Mind Is Without Fear And The Head Is Held High; Where Knowledge Is Free; Where The World Has Not Been Broken Up Into Fragments By Domestic Walls; Where Words Come Out From The Depth Of Truth; Where Tireless Striving Stretches Its Arms Towards Perfection; Where The Clear Stream Of Reason Has Not Lost Its Way Into The Dreary Desert Sand Of Dead Habit; Where The Mind Is Led Forward By Thee Into Ever-Widening Thought And Action– Into That Heaven Of Freedom, My Father, Let My Country Awake.”

“There are some parts of the world that, once visited, get into your heart and won’t go. For me, India is such a place. When I first visited, I was stunned by the richness of the land, by its lush beauty and exotic architecture, by its ability to overload the senses with the pure, concentrated intensity of its colors, smells, tastes, and sounds… I had been seeing the world in black & white and, when brought face-to-face with India, experienced everything re-rendered in brilliant technicolor.”

“If I were asked under what sky the human mind has most fully developed some of its choicest gifts, has most deeply pondered over the greatest problems of life, and has found solutions of some of them which well deserve the attention even of those who have studied Plato and Kant, I should point to India. And if I were to ask myself from what literature we who have been nurtured almost exclusively on the thoughts of Greeks and Romans, and of the Semitic race, the Jewish, may draw the corrective which is most wanted in order to make our inner life more perfect, more comprehensive, more universal, in fact more truly human a life… again I should point to India.”

“This is indeed India! The land of dreams and romance, of fabulous wealth and fabulous poverty, of splendour and rags, of palaces and hovels, of famine and pestilence, of genii and giants and Aladdin lamps, of tigers and elephants, the cobra and the jungle, the country of hundred nations and a hundred tongues, of a thousand religions and two million gods, cradle of the human race, birthplace of human speech, mother of history, grandmother of legend, great-grandmother of traditions, whose yesterday’s bear date with the modering antiquities for the rest of nations-the one sole country under the sun that is endowed with an imperishable interest for alien prince and alien peasant, for lettered and ignorant, wise and fool, rich and poor, bond and free, the one land that all men desire to see, and having seen once, by even a glimpse, would not give that glimpse for the shows of all the rest of the world combined.”

“It is impossible not to be astonished by India. Nowhere on Earth does humanity present itself in such a dizzying, creative burst of cultures and religions, races and tongues. Enriched by successive waves of migration and marauders from distant lands, every one of them left an indelible imprint which was absorbed into the Indian way of life. Every aspect of the country presents itself on a massive, exaggerated scale, worthy in comparison only to the superlative mountains that overshadow it. It is this variety which provides a breathtaking ensemble for experiences that is uniquely Indian. Perhaps the only thing more difficult than to be indifferent to India would be to describe or understand India completely. There are perhaps very few nations in the world with the enormous variety that India has to offer. Modern day India represents the largest democracy in the world with a seamless picture of unity in diversity unparalleled anywhere else.

All in all, these are the top 10 famous saying on Republic Day of India that though written years ago are today also serving as an inspiration for the youth of the nation who are ready to go to any depth so as to preserve the pride and dignity of Mother India.  Jawaharlal Nehru rightly said, “At the dawn of history India started on her unending quest, and trackless centuries are filled with her striving and the grandeur of her success and her failures. Through good and ill fortune alike she [India] has never lost sight of that quest or forgotten the ideals which gave her strength.”

- Previous article « Must Know Facts About How to Celebrate Lohri