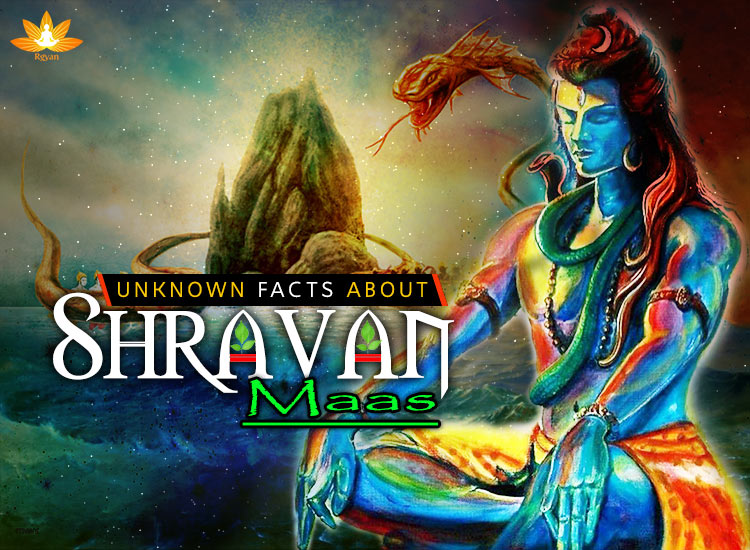 The much-awaited month of Sawan has finally arrived bringing with it all the joy and happiness. Shravan Maas, also popularly known as Sawan Month is one of the most auspicious months in the calendar of Hindu mythology. During this month devotees of Lord Shiva make all the efforts to please God. The majority of people, either fast the entire month, or at least on all the Mondays of the Shravan Maas. Here we are with the Top 10 Must Known Facts About Shravan Maas:

One of the major events in the Hindu mythology known as Samudra Manthan, a collaborative effort of the Gods and the demons took place during this month. The intention behind longing to prove the strongest was to impress the Goddess of wealth, Goddess Lakshmi. As a result, the Goddess would reward the winners with the nectar from the ocean. Along with the fourteen valuable things, poison (Halahal) also came out of the ocean which was stored by Lord Shiva in his throat to save the world. This is why we celebrate this pious month.

Lord Shiva gave the crescent moon a place on his head during the month and other Gods began offering him the water of River Ganges to tame the poison.

3. Fasting during the month

The meaning of the word “Shravan” is “to hear”. It is a popular saying that people should opt for listening to the religious as well as spiritual discourse during this holy month.

You can witness the Shravan constellation during this period of Shravan maas on a full moon night. This day is popularly known as Shravan Purnima.

This powerful mantra is said to come into existence and perfection during the month of Shrawan. The mantra is a composition of Rishi Markandeya.

This is one of the most powerful fasts that people keep during the month of Shravan Maas. If you keep the fast you are said to get the rewarding results.

In this month if you worship Lord Shiva, the Hindu mythology claims that it is 108 times more powerful in comparison to any other time of the year.

Fasting on all the Mondays that fall in this pious month is a common ritual that all the unmarried women seeking a suitable husband keep.

Rudraksha symbolizes Lord Shiva and wearing is considered very auspicious. Thus, devotees of Lord Shiva ensure wearing a Rudraksha during Shravan month to please him. Some people also do Japa with Rudraksha mala.

All in all, these are the Top 10 Must Known Facts About Shravan Maas. These facts will help you gain clarity about a lot of things that people indulge in during this month.