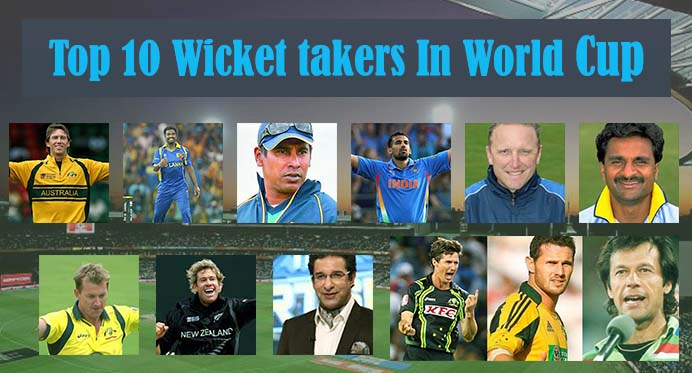 One of the most important aspects that help in winning a cricket match is taking wickets. Not all the players are efficient at taking wickets but those who are have an extra fame associated with their names. Here we are with a list of few such players who are applauded for having taken a decent amount of wickets in the cricket matches that they have played. The Top 10 Wicket takers In Cricket World Cup are as follows:

Glenn McGrath is one of the most popular Australian fast bowler and also the one to lead the list of cricketers to take the most number of wickets over the 10 editions of World Cup. He bags as much as 71 wickets in just 39 World Cup games that he has played.

Muttiah Muralitharan is the second one our list. He justifies his place in the list of Top 10 Wicket takers  in World Cup by having taken 68 wickets in just 40 matches as he played in 5 editions of the World Cup.

Wasim Akram who is the left-arm pacer from Pakistan is on the third position in our list. He has taken 55 wickets in just 38 matches. He helped the nation win in the world cup of 1992 by taking 3 wickets for 49 in just 10 overs.

Chaminda Vaas is a popular cricketer from Sri Lanka. Out of the 31 World Cup matches, he took 49 wickets and grabbed hmself a place in the list of 10 Best Wicket takers In World Cup.

Zaheer Khan who plays for the Indian Cricket team bags 44 wickets that he took in just 23 matches. It was him who played an important role in the win that India experienced in 2011.

Allan Donald who plays for the South Africa’s cricket team is the next in the list. He has taken 38 wickets in just 25 matches.

Another cricketer who has taken a lot of wickets and secured a place for himself in the list is Javagal Srinath. He has taken 34 wickets in just 44 matches.

Though it can be a great surprise for you but Jacob Oram is another name in the list. he is applauded for taking 6 scalps in only 23 games.

Brett Lee is another name in the list. The players bags 35 wickets in just 17 matches.

It is hard to undisputedly give the 10th spot in the list to any one player. There are three players who equally justify the 10th position. They are Brad Hogg, Imran Khan and Shaun Tait as each one of them have taken 34 scalps.

All in all, these are the Top 10 Wicket takers In Cricket World Cup who have played efficiently in their career span and have helped their respective nations to win the cricket matches.