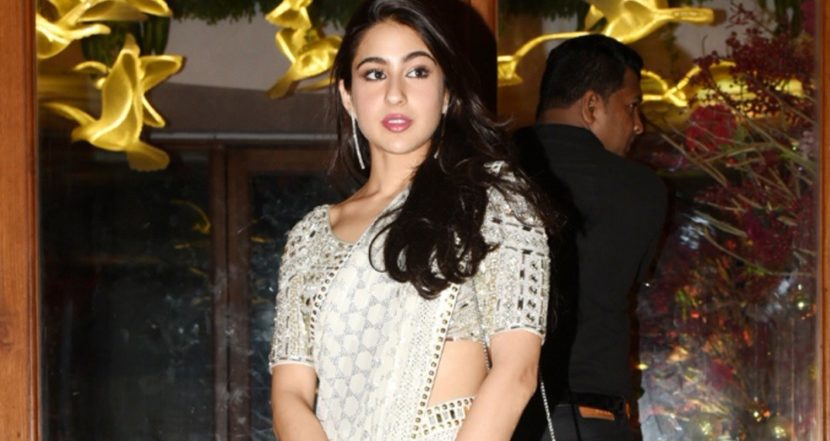 The way Sara Ali Khan carries herself, she can justly be called the princess. On various occasions he can be spotted alone and with friends and family spreading the magic. The pretty lady derives her charismatic looks from her handsome father Saif Ali Khan and beautiful mother Amrita Singh. The girl has just made a debut in Bollywood but has already begun to rule the heart of millions of people belonging to diverse age brackets.  If you are one of them who are lured by the awesome debutante then you might be looking for some of her fine pictures to adore and set as your wallpapers. Here we are with the top 7 most stunning looks of Sara Ali Khan. Sara Ali Khan has set several ethnic fashion goals for all the young ladies out there, every time she heads out in an ethnic wear she robs are hearts and leave us amazed with her elegant looks. The first time she did so was when she appeared with her mother Amrita in 2012 in the cover of Hello magazine. The girl resembles her mother in every aspect. Both of them looked glamorous and elegant in the cover photo. There are several occasions when she is spotted at the parties that are organised and hosted by Saif Ali Khan as well as Kareena Kapoor Khan. Her party looks are equally fascinating and you can literally drool over seeing her dressed up finely for such parties. The actress dresses up in the most subtle way for all the parties that she has to attend. The girl did not take much time to become an important part of the Bollywood parties that take place every other day. In such formal meeting, she arrives in very sober and elegant dresses and make up that literally amazes the audiences. Carrying herself well in every attire is the specialty of Sara Ali Khan. We guess that she gets this skill from her mother. No, she is not only fond of acting but has a passion for sports too. At multiple times she can be seen bonding well with her father, Saif Ali Khan and brother, Ibrahim Ali Khan over the cute little tennis matches. Sports dresses are most of the time body hugging dresses. If you have a figure like that of Sara Ali Khan then obviously you are going to rock it. You cannot miss to catch up with her pictures at family function where she mostly wears Indian. She looks gorgeous and very beautiful in Indian attire that suits her very well. with the traditional look she mesmerizes all who have a glance of her. Sara is a close friend of Jhanvi Kapoor who is Sridevi’s daughter. The two friends can be seen hanging around at very places and on occasions they can be seen twinning wearing same colours and styles. One thing that is appreciable about the actress is that all the colours that you can possibly think o suits her well. be it dark colours or the light ones, she looks pretty n all that colours of the rainbow. As already said, the girl has a passion for physical activities. Among one of these activities is gym. You can see her a lot of times at gym. Her videos as well as photos from the gym are awesome.

All in all, these are the top 7 most stunning looks of Sara Ali Khan. You can take some inspiration from these HD wallpapers of Bollywood actress. This is just the beginning. We are sure that the girl is going to give us  millions of other adorable pictures to set as goals.

- Previous article « 6 Must Haves for Stunning Lohri Party and Celebrations

Next article - Most Amazing Dining Ideas for Lohri Party »