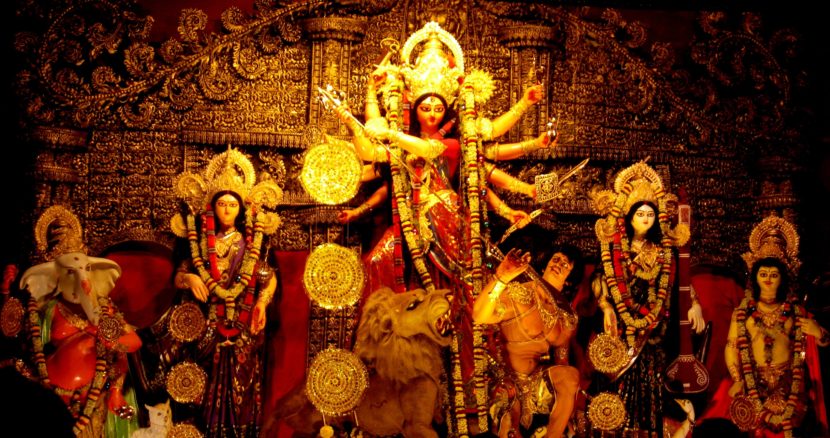 Navratri festival is celebrated in the month of October

Navratri festival is celebrated in the month of October. Navratri 2019. They are starting on 29th Sep Sunday and ending on 7th October, Monday. These are the days of Durga worship, health, happiness and frolic. It just is connected to religious sentiments and honouring the girl child at the end of the Navratras. Even Ram Navmi holds special importance.

States in India and their unique Durga Puja celebrations

Navratri celebrations in different states of India are to kick-off soon, calling on the people to reassert their faith in mother Durga. Since India is a diverse and multi-cultural country, different states have their share of traditions, rituals, to worship the divine.

Himachal is home to several Devi temples, so it is obvious for the state to rank high when it comes to celebrating the holy nine nights of the Goddess. Navratri celebrations in HP start when the rest of India comes close to winding up the worship. At the Dhalpur Maidan in Kully Valley, Lord Raghunath is ritually worshipped along with other deities throughout the nine-day-long fest. The tenth day of the festival is called Kullu Dussehra.

There are striking similarities in the way Durga Puja is celebrated in the states of UP and Bihar, as they feed little girls on the final day of worship.

Apart from offering special worship to the goddess in holy shrines, the locals set up a temporary altar of the deity, and recite the scripture.

Grand pandals are set up in different themes every year in West Bengal to enshrine beautiful idols of Durga, Lakshmi. Priests perform rites as per scriptural injunctions for a period of four days. On Dashami, the Goddess is bidden farewell with pomp and show. Assam, too, follows a similar practice of worshipping the goddess.

Devotees celebrate the Navratri festival in Gujarat by observing fasts and performing the famous traditional dance Garba. The worship is concluded by feeding young girls, and bidding them adieu with money or gifts.

The evening aarti which is done using a garbi, an earthen pot and diyas – so unique to Gujarat.

The citizens of Punjab are as much attached to Durga worship as their brethren in other states. During the nine holy nights, daily jagrans are held in temples. On the day of Ashtami and Navami, the devotees invite young girls in the age group of 5 to 10, and honour them with food, gifts, and money.

Next article - Top 10 Problems to be Addressed by #MeToo Campaign »